Get ready for the #Houston19. 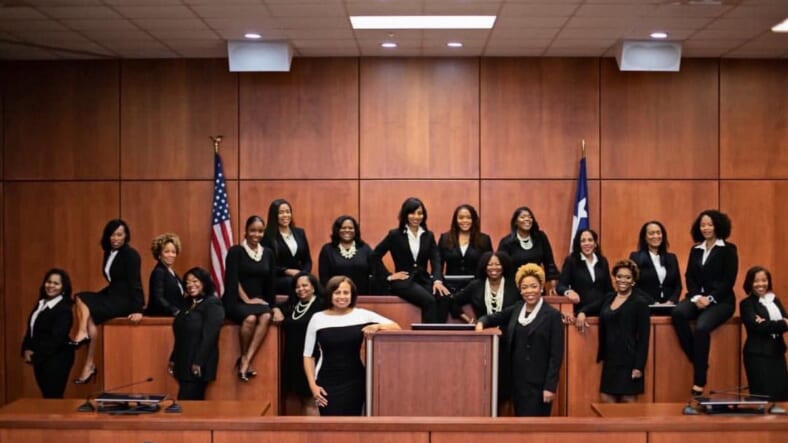 Here are the 19 African American women judges who were up for reelection in Houston and won otherwise known as the Houston 19. (Twitter)

A group of Black judges in Houston, Texas have seriously become “squad goals” during the 2018 midterms.

According to Cosmo, this week 19 Black women ran for various judicial seats in Harris County, and as if this wasn’t impressive enough, on Tuesday they all won their races.

This marks the single biggest victory for Black women in the county’s history and their inspirational feat is being lauded as a bright spot in the midst of all the disappointment surrounding Democrat Beto O’Rourke‘s loss to Republican incumbent Ted Cruz in the Texas Senate race.

“Despite the Beto loss this happened in Houston!!!!!!!” wrote one proud Texan. “Can you say #BlackGirlMagic #Houston19 Shoutout to my city!!!!!! 19 African American Female Judges got elected that’s SO AMAZING!!!! #MidtermElections”

The group of high achieving women are call themselves the #Houston19, and their jurisdiction, Harris County,  encompasses most of Houston, is the third-largest county in the country. These women being given judicial seats also creates a bench that will more accurately reflect the incredibly diverse community it serves.

According to a study the American Constitution Society, non-white women comprise less than 20 percent of judicial forces at the state level.

PHENOMENAL #sweet19 #blackgirlmagic of the 2018 Election …

“Across the board, the diversity of the Democratic ticket was huge and I think it sends a message that we can lead here in Harris County. We can lead in the state of Texas,” Judge-elect Lawshawn Williams told KPRC.

“For Black women particularly, we take a seat at the table and things change. For us in this situation it will change in terms of criminal justice reform, health care, these are the kinds of cases that will come before us and really impact our community.”

“The duties of a county judge vary depending on the population of the county. In most rural counties, the judge has broad judicial responsibilities and is often the principal source of information and assistance,” explains the Texas Association of Counties guide.

Supporters and celebrities alike have taken to showing their love for the women on their incredible achievement.

All 19 of the #Houston African American Female Judges up for election WON tonight!