A new film from Netflix explores why Black athletes should be owners too. 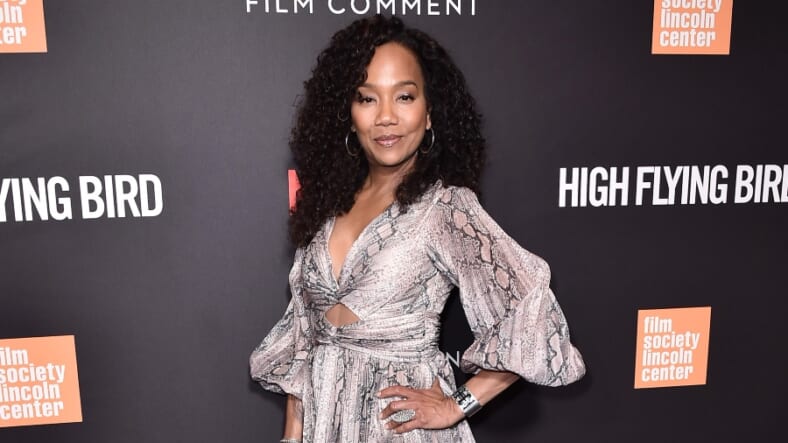 Actress Sonja Sohn (The Chi, The Wire) is starring in a new Netflix basketball drama, in which art perfectly imitates life when it comes to Black athletes.

‘High Flying Bird’ is the tale of a Black basketball agent’s (André Holland) fight to give his rookie draft pick a winning strategy during an NBA lockout.  The movie was written by ‘Moonlight’ co-writer and playwright Tarell Alvin McCraney.  Sohn, plays Myra, a witty and confident players representative who wants the best for the athletes she works for.

But in real life, Sohn, also wants the best for Black athletes who are playing sports in increasingly challenging social and political climates.

“Ultimately the game that we’re all playing, that we are roped into playing is a capitalist game,” Sohn continues.  “We live in a capitalist society and that’s a society that ensures that there is an underclass and the underclass is to be treated a certain way.”

In Sohn’s point of view, athletes should play smart and accumulate wealth, which can be used to change the game for future generations.

“Honestly what I’d love to see is super wealthy Black folks, especially somebody like these athletes, just go and adopt whole neighborhoods,” Sohn tells theGrio. “Just be like, ‘This my neighborhood. I’m pouring. There’s only so much money that I need to live off of for the rest of my life really.'”

Sohn says athletes like LeBron James are the perfect example of businessmen building a future beyond themselves.  James, who starred in this weekend’s NBA All-Star game, founded his own school and owns the media company Uninterrupted, which has already produced acclaimed documentaries like ‘Shut Up and Dribble’ (2018).

“Clearly his post-basketball plan is already in motion. He’s got a production company that putting out good material you know stuff that’s in his wheelhouse that he feels connected to,” says Sohn.

“I really respect that he looks like he’s developing ownership in other areas. He’s leveraging his position there and then creating.“

CHARLOTTE, NORTH CAROLINA – FEBRUARY 17: LeBron James #23 of the LA Lakers and Team LeBron reacts in the first quarter during the NBA All-Star game as part of the 2019 NBA All-Star Weekend at Spectrum Center on February 17, 2019 in Charlotte, North Carolina. Copyright 2019 NBAE (Photo by Streeter Lecka/Getty Images)

Sohn’s philosophy of giving back is one she’s backed up with her own activism.  The actress, who had a longtime role as Detective Shakima Greggs in ‘The Wire,’ created the Baltimore-based outreach program called reWIRED for change.  Sohn also directed “Baltimore Rising” (2017) a documentary about Freddie Gray.

She can also be seen playing the role of Laverne in the second season of “The Chi,” where similar to her other projects, the message of empowerment is loud and clear.

“The people deserve to have a voice, which I think that show gives them,” says Sohn.  “So you know what I think they’re lots of fans that are going to continue to be fans after the second season.“