Cardi B, who isn't a stranger to high profile drama with her significant other placed a message of support for Khloe Kardashian -- but didn't hesitate to speak her mind on surrounding topics 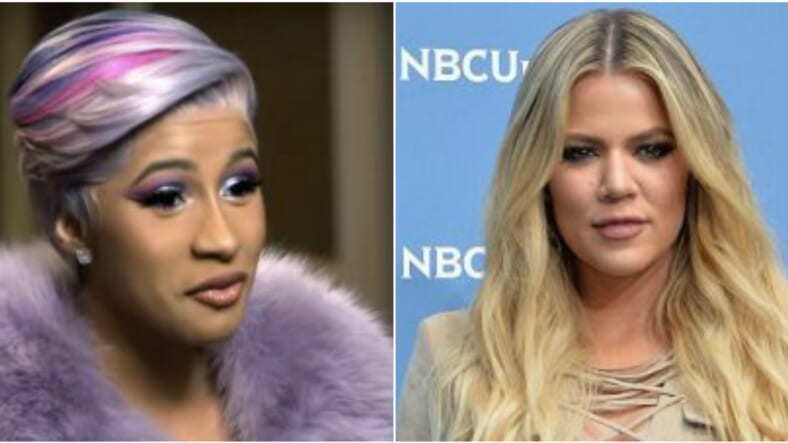 ABC News, Getty
After it was reported that Khloe Kardashian’s boyfriend and father to her 10-month-old daughter, Cleveland Cavaliers star Tristan Thompson, was alleged to have cheated on her, social media couldn’t help but go into a frenzy. What’s worse is the woman in question was close family friend, and bestie to her sister Kylie Jenner, Jordyn Woods.
READ MORE: Cardi B slams Tomi Lahren for being a racist
Being no stranger to dealing with infidelity in the public eye after, rapper Cardi B, who has had her fair share of relationship woes with Migos rapper Offset, took to her Instagram Live last night in a show of sympathy and support for Khloe:

Cardi speaking facts ? Khloe has so much support and will get through this ❤️ @khloekardashian @iamcardib #cardib #khloekardashian

But the 26-year-old Grammy-award winning rapper didn’t stop there. Cardi then proceeded to call out the “fake feminism” movement, accusing most of the haters who are happy for those in Khloe’s position, are mostly women:

“I feel like, everybody wants to talk about how they want to uplift women. All these fake ass, woke people always want to talk about uplifting women, feminism, this-this-and-that, but it be the same women that be laughing in the comments when another woman is going through some[thing]. And it’s all the time, and that’s for every single woman. And I just feel like, that sh*t is wack!”

Though Cardi recently confirmed that her and husband Offset are currently working through their issues for the sake of their family, there has been no word yet from Khloe and her camp as to what’s next for her, Tristan and True.