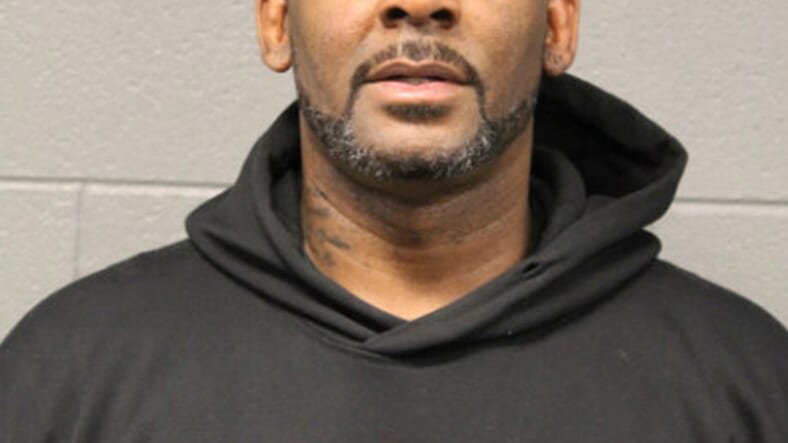 Robert Sylvester Kelly, better known as R. Kelly, is now in police custody after being charged with 10 counts of aggravated criminal sexual abuse. The singer turned himself in this evening hours after the charges were announced.

A Chicago Suntimes reporter captured video of R. Kelly walking into a Chicago police station and being led through the station in handcuffs. He ignored questions from the throng of reporters waiting for his arrival.

R&B singer R. Kelly just surrendered himself to Chicago police as he faces charges of aggravated sexual abuse of four victims. He was handcuffed and led away. pic.twitter.com/mOh0SHHug9

Kelly is being held without bail.  The indictment prosecutors filed on Friday state that there are four victims in this case and at least three of them were minors at the time of the sexual abuse.

Last month, Lifetime aired Surviving R. Kelly, a searing six-hour documentary that meticulously catalogued decades of sexual abuse claims against the platinum-selling singer. He has been dropped by his record label RCA and Australia is looking to ban him from the continent.

Earlier this month, attorney Michael Avenatti turned over to authorities what he said was a video of R. Kelly engaging in sex acts with a girl who appeared to be underage. A grand jury was convened and two women testified. The Cook County State’s Attorney has now officially charged R. Kelly on 10 counts of aggravated criminal sexual abuse.

R. Kelly is no stranger to the court system. In addition to settling numerous claims from young women who alleged the singer sexually abused them, he was also indicted in 2002 on 21 charges of child pornography. The charges were in connection with a video that appeared to show the singer engaging in sexual acts with an underaged girl. This included intercourse and urinating on the girl.

Kelly was arrested at his Florida home and entered a not guilty plea. His attorneys managed to delay a trial for years. By 2004, after releasing some of his biggest hits like “Ignition (Remix),” the number of charges had been dropped to 14.

Kelly continued to produce hits from his Chocolate Factory album, including “Step in the Name of Love.” In 2008, Kelly was finally brought to trial. A young woman took the stand and testified to the identity of the girl in the video. She claimed that she had engaged in numerous threesomes with Kelly and the then-underaged girl. Sparkle, a singer who previously collaborated with Kelly, also testified that the girl was in fact her niece.

However, the rest of Sparkle’s family and the girl herself denied it was her. “I really don’t know if my family was paid off,” Sparkle said in Surviving R. Kelly. “I know the family was still hanging out with him, that my brother-in-law was still playing guitar on a number of his songs. And that’s what it is.”

After one day of deliberation, R. Kelly was found not guilty.

R. Kelly has also been entangled with landlord problems in both Georgia and Illinois. In 2018, he was evicted from two Atlanta homes he had been renting and in January 2019, the singer’s attorneys reached an agreement with a Chicago landlord who said R. Kelly owed  $80,000 in back rent.