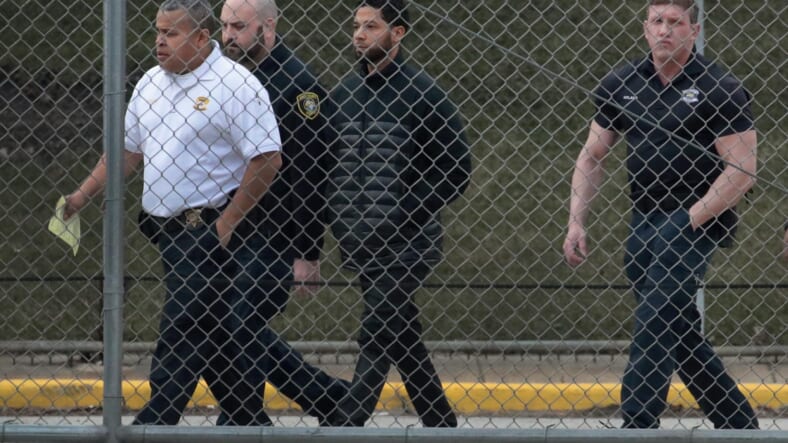 Now that the smoke is clearing from around Jussie Smollett‘s arrest last week, a new twist has emerged, calling at least one of the claims by the Superintendent of Chicago PD into question.

TMZ reports that texts between Smollett and the Nigerian-American brothers accused of being is co-conspirators in the alleged hate crime show that the $3500 check at the center of the case was indeed for fitness training, and not payment for the attack.

Abel and Ola Osundairo have been aiding investigators with making sense of the alleged racist and homophobic attack that Smollett claims went down in the early morning hours of Jan. 29 in Chicago.

The brothers reportedly told police that Smollett gave them the check six days before the attack, and while he didn’t specifically say that the money was payment to stage an attack, the brothers claim it was understood what the check was for.

However, sources connected to the Empire star maintain that Smollett paid for five weeks of training and a meal plan. The actor/singer wanted to help get his body in shape for a new music video. According to TMZ, the memo line reads, “5 week Nutrition/Workout program Don’t Go.”

The artist was going to go shirtless in the video for his new song “Don’t Go.” But Smollett needed to lose 20 pounds before the shoot, which is why he hired Abel (AKA “Bon”).

According to TMZ, various texts between the two men starting from January 20 to January 28 -the day before the “attack”- all mention Smollett’s weight loss plans.

“I know you’re traveling today, make sure you get at least 45 mins of cardio.” Bon wrote in one message

Another text outlines a meal plan for the day and a text on January 25 reads, “This is the meal plan and the breakdown of macronutrients. Also includes projected fat loss.”

After investigators pieced together texts messages between the actor and the brothers, as well as CCTV and ride-shares, police uncovered evidence that they said showed that Smollett orchestrated the attack on himself.

Smollett was charged last week with filling a false police report after claiming two men  hurled racist and anti-gay slurs and looped a rope around his neck. But Superintendent Eddie T. Johnson claims the entertainer staged the hoax attack as part of a “publicity stunt…to promote his career.”