The exclusive black-tie affair raises tons of money for the Children's Hospital of Los Angeles. 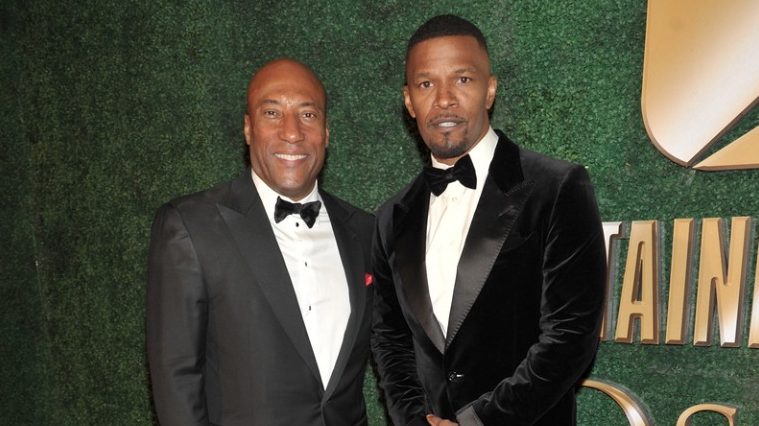 Byron Allen hosted his third annual Oscars gala benefitting Children’s Hospital Los Angeles at the Beverly Wilshire Hotel on Sunday evening where stars like Kenneth “Babyface” Edmonds, Quincy Jones and Stevie Wonder dined and danced while raising money for a worthy cause on Hollywood’s biggest night. The exclusive, black-tie affair emceed by Jamie Foxx is the hottest ticket in town when it comes to Oscar viewing parties and it raises raises money for charity while hosting Hollywood’s elite.

Being Mary Jane creator, Mara Brock Akil and her husband, Black Lightning creator Salim Akil were holding court at the lavish affair where folks like Anthony Anderson, Quincy Jones, Kathy Griffin, Shaun Robinson, Jackee, David Alan Grier, and Daymond John were dressed to the nines while they viewed the live telecast of the Academy Awards. The room went wild when Ruth E. Carter won the award for Best Costume Design for Black Panther and were equally excited over big wins from Regina King, Spike Lee, and Mahershala Ali.

Fortunately for the Children’s Hospital Los Angeles, there was tons of power and money in the room and guests were feeling generous as they bid on auction items. When Byron Allen brought Chrissy Teigen onstage, the admittedly tipsy Twitter queen promised “whatever you want, just bid and I’ll do it,” later joking “you can take a shot out of John’s Grammy!” She donated cooking lesson with Chrissy Teigen at her home and a Real Housewives binge-watching session that nabbed a whopping $60,000 from Allen and his wife.

Jamie Foxx was the perfect emcee for the evening and kept the party going by dancing along with the DJ and singing along to his part of Kanye West’s “Gold Digger.” He also performed his hit “Blame It” and sent shout outs to a few of his favorite winners of the night.

John Legend treated the crowd to a private performance, serving up a medley of his hit songs like “Ordinary People” and “Love Me Now” once the auction was over. The EGOT winner had no trouble keeping everyone on their feet throughout his mesmerizing set that he concluded with his own Oscar-winning song, “Glory” from Selma. “I had to do this one on Oscar night,” he noted.

As the Founder, Chairman and CEO of Entertainment Studios, Allen is the predominant African-American studio chief in Hollywood and has had a standout year of success, acquiring several high-profile projects for distribution through Entertainment Studios Motion Pictures and their distribution arm, Freestyle Digital Media. Last March he acquired The Weather Channel for $300 million and recently announced plans to launch the first Spanish language weather streaming service The Weather Channel en Espanol.

He was recently honored with the Brandon Tartikoff Legacy Award at the National Association for Television Program Executives (NATPE) conference in Miami. According to NATPE, the award recognizes “a select group of television professionals who exhibit extraordinary passion, leadership, independence and vision in the process of creating television programming and in evoking the spirit of Tartikoff’s generosity.”

“Byron Allen is the smartest, the kindest, hardest working and most decent person that I have ever met in my 54-year career in this business,” said Dick Robertson, former president of Warner Bros. Domestic Television Distribution, who crowned Allen the “King of Late Night TV” during his introductory speech as he re-traced Allen’s inspirational career from a kitchen table in a small condo to a thriving and growing, global media powerhouse.

“He did it all the old-fashioned way with hard work and a never say die attitude. But most importantly, he did it with grace, decency, and humor,” said Robertson. “And just think this magnificent enterprise all started on this little kitchen table at his condo in Century City. Is this a great country or what?”

Lucky for you, TheGrio‘s style correspondent, Johnny Wright, was on the red carpet to get up close and personal with all of the fabulous faces who attended this year’s Oscar gala. Check out the video above.