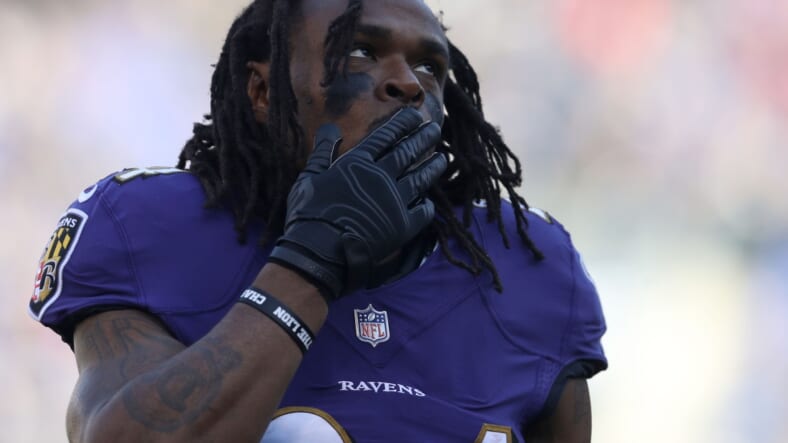 Running Back Alex Collins #34 of the Baltimore Ravens stands on the field prior to the game against the New Orleans Saints at M&T Bank Stadium on October 21, 2018 in Baltimore, Maryland. (Photo by Patrick Smith/Getty Images)

Baltimore Ravens running back Alex Collins’ has had a bad Friday due to an accident and then losing his spot on the team.

Collins, 24, was involved in a car crash on Friday morning about one mile from the team’s facility. Baltimore County police responded to a report of a car that had crashed into a tree on the 10000 block of Dolfield Road at about 6:48 a.m., police spokeswoman Officer Jennifer Peach said to the Baltimore Sun.

Collins was quickly arrested, but the charges against him were not immediately available. Ravens vice president of public relations Chad Steele told Sun that the team had spoken with police and was aware of the situation.

A few hours later, Collins – who was set to become a free agent – was released.  The team made it very short and sweet when they tweeted the announcement:

We have waived RB Alex Collins.

His season ended in early December when he was placed on injured reserve with a foot injury. He had started every game until Week 12. but averaged just 3.6 yards per carry and didn’t have a run of longer than 19 yards.

Collins had been on the outs with the team following the season. Ravens head coach John Harbaugh said Wednesday that Gus Edwards is the team’s top running back and that the Ravens would add some competition to the position this offseason.

Kenneth Dixon and De’Lance Turner are behind Edwards on the depth chart, and team officials are in Indianapolis this week evaluating potential prospects at the NFL scouting combine.