What made Serena Williams stop playing in the middle of an important match?

Williams, called the G.O.A.T. by many tennis fans had to put down her rack and leave mid-set in her matchup against Garbine Muguruza 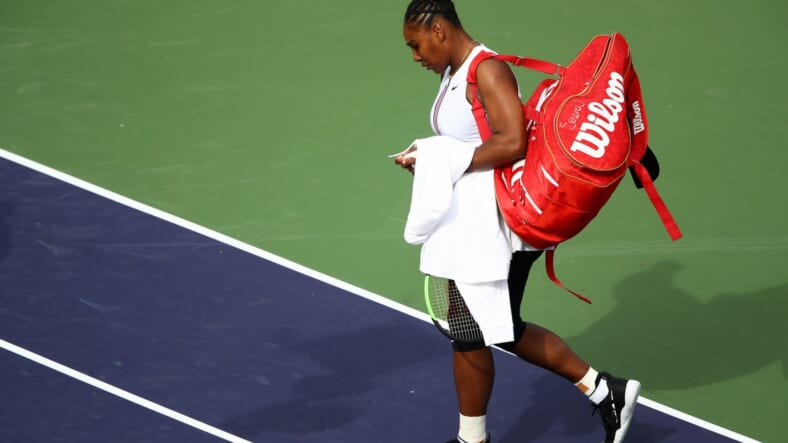 Serena Williams of the United States walks off court after retiring from her match in at the start of the second set against Garbine Muguruza of Spain during their women's singles third round match on day seven of the BNP Paribas Open at the Indian Wells Tennis Garden on March 10, 2019 in Indian Wells, California. (Photo by Clive Brunskill/Getty Images)

A viral illness took tennis champion Serena Williams off the court Sunday and cost her a chance to win the BNP Paribas Open at Indian Wells, Calif.

Yahoo Sports reports that Williams, 37, stopped playing in the middle of her third round match against Spain’s Garbine Muguruza on Day 7 of the tournament. She was checked by her trainer a few times during the course of the competition, but ultimately during the first game of the second set she decided against continuing.

“Before the match, I did not feel great, and then it just got worse with every second; extreme dizziness and extreme fatigue,” Williams said in a statement. “By the score, it might have looked like I started well, but I was not feeling at all well physically. I will focus on getting better and start preparing for Miami.”

READ MORE: Serena speaks out: ‘If you’re a female, you should be able to do even half of what a guy can do’

Her opponent, 25-year-old Muguruza, noticed that something was awry with Williams too.

“Yeah, at the end of the first set, I felt that maybe she wasn’t feeling well,” Muguruza said, via USA Today. “I don’t know. It’s really a weird feeling, because I don’t feel like I won the match point and (get the) well done, you know, good match (handshake). It was just like, ‘Man, we’ll play next time.’ Yeah, I think I played well one set. I’m going to take the positive side of that.”

Williams, who is currently ranked number 10 in the world, has battled health issues in the past that almost sidelined her ranking. After the birth of her daughter Olympia, Williams had postpartum struggles along and had major pregnancy complications and penned a powerful essay detailing how she almost died giving birth.

Once Williams recovers, she plans to compete in the Miami Open March 18.

Meanwhile sister Venus Williams was expected to take to the court against challenger Christina McHale on Monday.