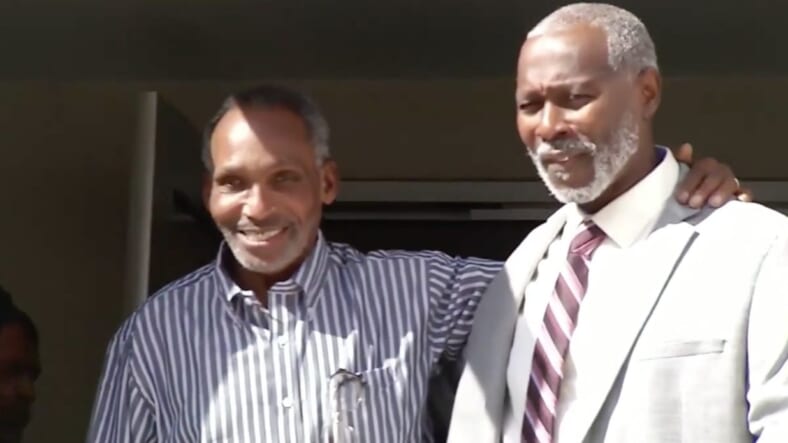 This week, Jacksonville inmates Clifford Williams, Jr., 76, and his nephew Nathan Myers, 63, had their day in court after spending 42 years in prison for the 1976 murder of a local woman and shooting of her roommate. On Thursday, a judge found there was no sufficient evidence to keep the pair in prison and ordered their release.

“Justice demands the granting of these motions,” Circuit Judge Angela Cox said after announced their convictions were to be vacated.

According to News4JAX, a recently formed unit of the State Attorney’s Office, the Conviction Integrity Unit and the Innocence Project conducted an investigation one year ago after Myers wrote them a letter asking for their case to be re-examined.  This is the first case the Integrity Unit has investigated that has lead to a conviction.

Williams was 34 and Myers merely 18 when they were convicted after the two-day trial. Myers was offered a five-year prison sentence if he would testify against his uncle, but he refused. Williams was initially sentenced to death, but in 1980, the Florida State Supreme Court outlawed the death penalty and Williams’ sentence was amended to life-in-prison.

“My mom died while I was on death row,” Williams said. “I just wanted to get out and be with my kids. There wasn’t nobody but them.”

Myers expressed his gratitude for his second chance at life.

“Right now I feel blessed, you know, because I feel among friends,” Myers said. “I’m not bitter for what happened to me because the Lord Jesus Christ made me to be a man. I was a kid when I come to prison. I grew up on my own, so now I understand the things a man do. What I want to do now is have a chance to go out and be that man.”

News4JAX reported that in 1976, Jeanette Williams was shot and killed in her apartment as she and her roommate Nina Marshal slept in bed. Marshal was only wounded in the shooting and told investigators that two men burst into their bedroom and fired shots. The surviving roommate would go on to identify Myers and Williams as the shooters.

The pair claimed they were at a party up the street during the time of the shooting and witnesses corroborated their statements. Evidence also showed the bullets did not come from inside the house, but from outside. A local man named Nathanial Lawson told friends of Myers and Williams that he was the one that committed the murders and officers knew he was near the scene, but they failed to ever investigate him and he later died.

According to News4JAX, wrongfully convicted individuals found innocent are entitled to compensation. Florida law requires them to receive $50,000 annually up to a maximum of $2 million, as long as they don’t have any prior felony convictions.