Chicago is set to elect its first African-American female mayor after former federal prosecutor Lori Lightfoot and Cook County Board President Toni Preckwinkle prepare for a runoff election on April 2. 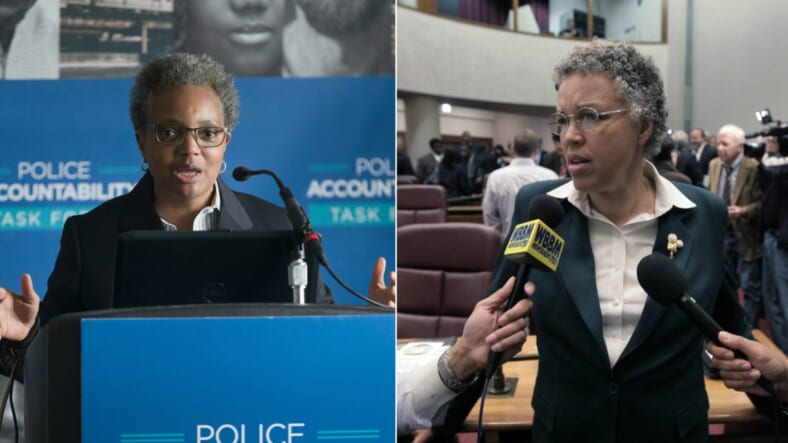 Chicago is set to elect its first African-American female mayor after former federal prosecutor Lori Lightfoot and Cook County Board President Toni Preckwinkle prepare for a runoff election on April 2.

“We may not yet be at the finish line, but we should acknowledge that history is being made,” Preckwinkle told supporters at an event in Hyde Park back in February “It’s clear we’re at a defining moment in our city’s history, but the challenges that our city faces are not simply ideological. It’s not enough to say Chicago stands at a crossroads. We need to fight to change its course.”

READ MORE: Hundreds gather in Chicago for and against State Attorney Kim Foxx

This is the second time Chicago has had a mayoral runoff, which occurs when no candidate collects more than 50 percent of the vote in the first round.

Whoever wins, Chicago’s first Black female mayor will replace the two-term incumbent Rahm Emanuel, who announced last fall that he would not seek re-election.

Lightfoot spoke of the skeptics who doubted her path to victory, telling The New Yorker “that not every day a little black girl in a low-income family from a segregated steel town makes the runoff to be the next mayor of the third-largest city in the country.”

Lightfoot or Preckwinkle will become the Windy City’s second female mayor, following Jane Byrne, who served one term from 1979 to 1983.

If Lightfoot is elected, she would become the city’s first openly gay mayor.

“This was always going to be a change-versus-old-guard election,” said Pete Giangreco, a Chicago political strategist. “Lori got on the air with a really good ad, telling a story about putting an alderman away, as a prosecutor. That dovetailed with being an African-American woman, being gay, being a mom—all of these attributes that, particularly, younger white progressives like. People said, ‘We want change,’ and there was nothing Toni could do to stop it.”

Meanwhile, both women have vowed to hold a unity news conference the morning following Tuesday’s election. The move comes at the request of Rev. Jesse Jackson, who has not endorsed a candidate in the race.

“Tuesday, the race will be over,” Jackson said. “The healing must begin.”

The famed civil rights leader read the pledge aloud at the South Side headquarters of his Rainbow/PUSH Coalition, after which both Lightfoot and Preckwinkle signed.

“This letter is signed by both of us in our respective positions as Chicago mayoral candidates for election April 2, 2019. Whereas our task in running for office is done, we realize as leaders we must show Chicago and the nation how we can win with grace and lose with dignity. In a real sense both of us are winners,” the pledge reads. “Rev. Jackson has appealed to us to remember those who want healing and reconciliation in the aftermath of this tumultuous election. Neither of us want to see our city and county in protracted division.”

“Therefore, we agree to hold a joint press conference Wednesday April 3, 2019 at 10 a.m. at a site mutually agreeable to both of us,” the pledge concludes.

Both women would become the second Black mayor after Harold Washington, who served from 1983 until he died in 1987.