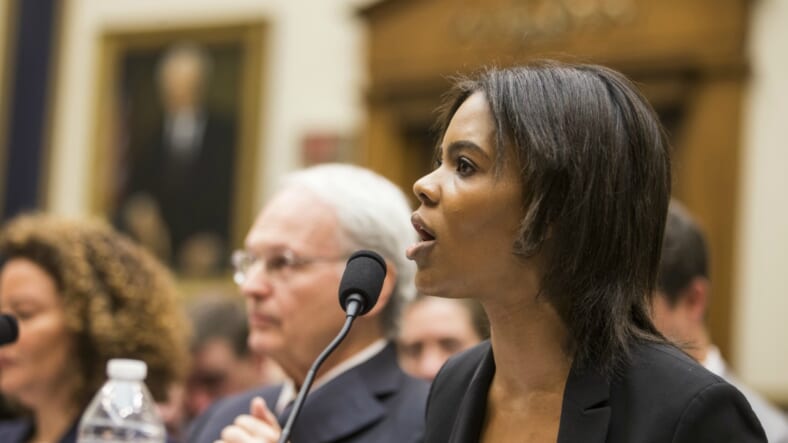 Black conservative activist Candace Owens testified before the House Judiciary Committee on Tuesday during a hearing on hate crimes and white nationalism, The Hill is reporting, but was critical of the hearing, accusing lawmakers of “fear-mongering” rather than trying to address racism.

“We’re hearing [terms like ‘white nationalism’] sent around today because what they want to say is that brown people want to be scared, which seems to be the narrative that we hear every four years ahead of a presidential election,” Owens said, according to The Hill.

Owens is communications director for Turning Point USA, a right-wing youth organization. Joining her to testify will be Eileen Hershenov, senior vice president for policy at the Anti-Defamation League, Eva Paterson, president and founder of the Equal Justice Society, a group that aims to restore constitutional standards, and Neil Potts, public policy director of Facebook, The Hill said.

READ MORE: No need to falsely blame Candace Owens for the horrific New Zealand mosque attacks, here are 5 legit reasons to give her a collective side-eye

“The hearing today is not about white nationalism or hate-crimes, it’s about fear-mongering, power and control,” said Owens, expressing skepticism over whether or not hate crimes have risen in America in recent years.

The House Judiciary Committee is livestreaming the session. You can watch below via live webcast:

“This hearing will examine hate crimes, the impact white nationalist groups have on American communities and the spread of white identity ideology,” the committee said in an announcement about the hearing. “The hearing will also foster ideas about what social media companies can do to stem white nationalist propaganda and hate speech online,” the committee announcement said.

The committee said in its statement that during the last Congress, lawmakers asked the White House for answers regarding “the growing threat of white supremacy and right wing extremism.” The committee received no answer, the statement indicated.

“Communities of color and religious minorities have long been subject to discrimination and have been targeted by groups who affiliate with ideologies of hate,” according to the committee announcement. “White identity groups have a long history of oppressing racial and religious minorities and promote individual expressions of violence with the aim of preserving white racial and political hegemony. Social media platforms have served as world-wide conduits to spread vitriolic hate messages into every home and country.”

Owens has been at the center of several controversies tied to her conservative and sometimes far right public stances — including criticism of Black Lives Matter and comments that Adolf Hitler’s murderous behavior would have been okay if he had limited it to Germany. She has also said that she believes that the Democratic Party takes Black voters for granted.

On Monday, Owens took to Twitter to address her detractors.

“Black people don’t have to be Democrats” is not hateful rhetoric.

“We’re gonna impeach this motherf**cker” is.

You and your little Congress clique of raging anti-Semites do not scare me.

My voice will be heard tomorrow. #BLEXIT https://t.co/LoQ8P6hFHS