Eartha Kitt did what? Actress Jackée Harry recounts a time when the diva did more than purr 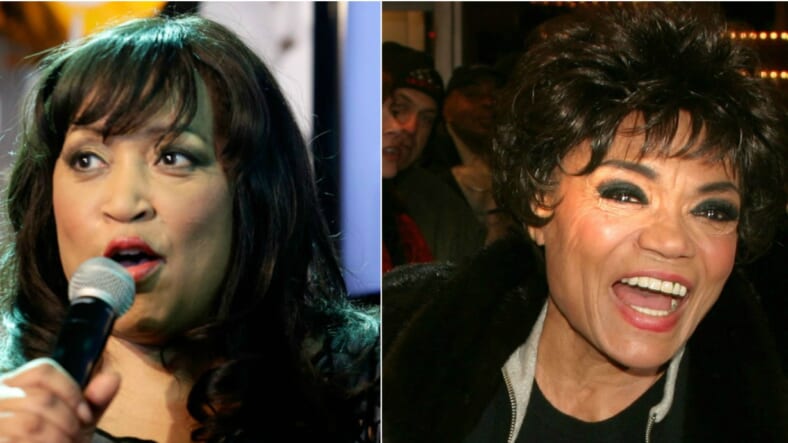 Actress, Jackée Harry briefly set the Twitterverse ablaze when she alleged that she had once been slapped by the late legend, Eartha Kitt.

On Wednesday, Harry, 62, made the revelation in a response to a tweet asking users,  “what’s the most surreal encounter you’ve had with someone famous?”

She thought I was sleeping with her boyfriend.. which I was, but I didn’t know he was taken. ?? https://t.co/Cq4YkPM0uQ

According to PEOPLE.com, fans began to share their reactions on Twitter using hilarious memes and gifs. Many of them wanted Harry to reveal the name of the man in question, but as she has yet to do so, it may be safe to assume that she does not kiss and tell.

But keeping her sense of humor about the incident, she also continued to render a partial explanation to fans who wanted to know more. But classy as she is, she only explained with tongue-in-cheek grown folks rhetoric. And apparently, the identity of the shared paramour will not be revealed.

He didn’t just eat the groceries, he restocked the shelves. https://t.co/Dh2PQ7cVAO

He was a dual piano “playa.” We didn’t know he was going to tickle both of our keys. https://t.co/hKS5TlSBnb

But the explanation didn’t stop Twitter users from wanting her to spill more tea.

WHAT?! omg ? my nosy self needs the whole story pic.twitter.com/Z024CrjB0G

Aunty!!! It ain’t even a holiday and you serving TEA ??

His name must be Marcus ?? pic.twitter.com/n9iHrTTp79

Harry is famous in her roles on 80s sitcom “227” and “Sister Sister” a decade later. Last year on comedian Steve Harvey’s talk show, Harry revealed that a reboot of the hit show was in the works.

“It’s happening!” She said smiling. “I’m excited. Tia and Tamera [Mowry] … my babies, too. They won’t leave me alone. I can’t get rid of none of these women!”

Kitt, died on Christmas Day 2008 at age 81, at her home in Connecticut. She is known to older generations for her 1953 signature song “C’est si bon” and the holiday classic “Santa Baby,” and her recurring role as Catwoman on the campy “Batman” TV show of the 60s. But she’s also known for the stand she took against the Vietnam War squarely in front of then-First Lady Lady Bird Johnson in 1968, according to The Washington Post.

“You send the best of this country off to be shot and maimed. They rebel in the street. They will take pot . . . and they will get high,” she told Johnson, who was reportedly floored. “They don’t want to go to school because they’re going to be snatched off from their mothers to be shot in Vietnam.”

After the encounter, her fame waned and she performed mostly in Europe while raising her daughter, Kitt Shapiro.

But she remained beloved to Black Americans and gradually returned to performing in the states.  In a nod to her sexy screen persona, she was cast in a show-stealing role with Eddie Murphy as alluring, but out-of-touch fashion brand mogul Lady Eloise in 1992’s “Boomerang,” for which she is still remembered among younger fans.