Police officers from the area near Yale University in New Haven, Conn., opened fire on two people and maintain they did not obey commands, but witnesses say different 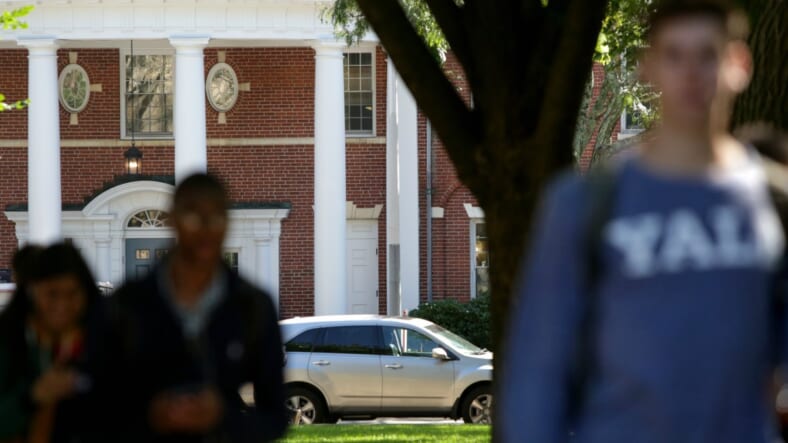 Students walk through the campus of Yale University. (Photo by Yana Paskova/Getty Images)

Two police officers from Hamden, Conn., and Yale University have come under scrutiny after shooting at a Black couple sitting in their car in a New Haven, Conn., neighborhood. Witnesses seem to dispute official report on the incident which took place roughly a mile from the campus.

According to reports, Stephanie Washington and her boyfriend Paul Witherspoon III were sitting in a car early Tuesday when officers suddenly approached with guns drawn. According to the Yale Daily News, the official narrative claims the driver of the car “exited the vehicle in an abrupt manner,” but video that was taken by a neighbor shows that one officer moved to the passenger-side window and quickly emptied his magazine. Washington was injured during the confrontation and Witherspoon, the driver, who was a suspect in an armed robbery was taken into custody, but he was released a short time later without charges.

Another witness, Chris Moore, told the station that the police started shooting before even giving a command.

The New Haven officer was identified as Devin Eaton, but the Yale University officer has yet to be publicly identified.  The University sent out a mass email to students regarding the incident. According to Yale Daily, a public advisory email they described that a Yale police officer was responding to a request for assistance from the Hamden police. Both the Hamden police officer and the Yale police officer “discharged their weapons,” and “a passenger in the vehicle was struck.”

Protests have taken place since the incident as residents expressed longtime distrust in the police.

Another resident suggested it was time the community took matters into their own hands.

“Start policing the police. Ask the police who they are hiring,” Thomas Fragago, a New Haven resident, said.

Eaton has been placed on administrative leave pending an investigation