On Good Friday, several key ways the Black church could win back millennials

OPINION: African Americans younger than 30 are more likely to live without religion than those older than 50, and that's because generational observations are keen, but they can be addressed 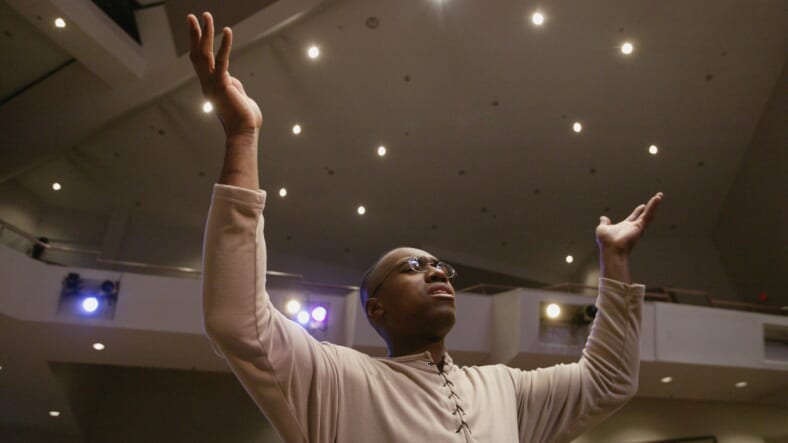 For Christians, the week leading up to Easter is often referred to as Holy Week, which begins with Palm Sunday, ends on Holy Saturday, and culminates on Easter Sunday.

Every day of this holiest of weeks has a special name and celebration attached to it, making today Good Friday, the day it is believed Jesus Christ was crucified.

READ MORE: Black millennials dropping out of church, but say it isn’t because of religion

According to CNN, people across the world are currently celebrating in a myriad of ways. Over in the Vatican, folks are fasting for most of the day and only eating fish. In Jerusalem where Jesus’ crucifixion took place, people are retracing the path He took while carrying wooden crosses in his honor. Here in America… well to be honest, aside from a couple invites to happy hour… I haven’t really heard all that much about Good Friday. And Easter is increasingly being treated more like an event to gather with family for a meal than a religious observance.

Does this mean that the Black community has become less god-fearing? Perhaps.

But just because they aren’t fearing a Christian God doesn’t mean they have stopped making spiritual practices a priority. In fact, several pieces have been written about the drastic uptick in African Americans showing interest in (or flat out practicing) more African based religions.

According to an article in The Atlantic, despite African Americans being typically more religious than the larger population, Blacks younger. 30 are three times more likely to claim a religion than Blacks older than 50.

While the Black church continues to be a respected institution in our community (as evidenced by the money African Americans chose to donate to those three churches burned down by a suspected Neo-Nazi in Louisiana instead of Notre Dame) many of us have found spiritual homes elsewhere. My Christian friends say this hurts their hearts and have on more than one occasion asked what I think it would take to “win back the millennials.”

And while I can’t say I speak for all millennials, below is a check list of how I believe the Christian church might be able to attract a younger, more discerning crowd looking for acceptance instead of fire and brimstone.

Be more inclusive of the LGBT community

It is impossible to walk into most prominent Black churches without running into an LGBT person. Be it in the pews or standing in the choir, the gay community has always been a visible and some would argue valuable part of church culture. And yet, after generations of feeling like second class citizens listening to anti-gay rhetoric like, “Love the sinner, hate the sin,” queer members of many congregations have made a mass exodus out of their church homes and into more affirming spiritual spaces.

Black women and gay people are often flippantly referred to as cultural tastemakers whose creative input and influence shape the world around us — whether they get credit or not. So it seems a bit shortsighted that Christian leaders may have underestimated how much that same influence could also affect them as well.

If you are ever going to create a safe space for millennials, re-engaging the queer community is an essential part of ensuring that happens.

READ MORE: For black women at church, it’s more than the Aretha eulogy

Speaking of the influence of women, another common critique about the current state of the Black church is the uber traditional and at times oppressive gender roles that are commonly upheld in non-secular spaces. Men are often treated as leaders sitting at the right hand of God, while women are still told to “serve” their men, particularly their husbands.

The amount of patriarchy that exists varies from church to church and across all the different denominations of the Christian faith, but the fact remains women will always appear to be sheep rather than shepherds until they are given real positions of power within the church hierarchy.

The days of girls only praying to be The First Lady of a church are fading. Now women want to steer the ship on their own or at the very least see another woman seated at the table speaking and advocating on her behalf.

Prosecute offenders in the congregation

In the wake of explosive documentaries like Surviving R. Kelly and Leaving Neverland our community has become hyper-aware of the way alleged abusers can easily live right under our noses. These predators often endear themselves to the community and lull people into a false sense of security before striking. And when they slip up, they often have an ecosystem built around them that protects them from prosecution.

Unfortunately one of the most notorious ecosystems used to shield sexual predators is the church.

Prominent members of congregations all across the country are constantly being exposed for ungodly actions against young men and women who trust them. The public perception that the churches are protecting these offenders instead of their victims has also caused many people to shy away from finding a church home.

Black churches are the backbone of our community and from slavery to the civil rights movement, were often used as hubs to gather and seek safety. If the church ever hopes to truly be uplifted in that way again — religious leaders must be very vocal in taking a stand against predators and systemically implement ways to protect its congregation from internal threats.

You can’t give a sermon about the devil outside while consistently ignoring the ones the walk amongst you. Millennials like to compare notes and this is one thing that often comes up in “Why did you leave the church?” discussions

Play nice with others

Showing pride in your faith and wanting to share your doctrine with the world is a pretty standard tenant of most religious and spiritual practices. However in a world where Netflix has a dozen documentaries about cult leaders, and Scientology is constantly being investigated in Dateline style specials for allegations of corruption — young people are a lot more skeptical about religion than in previous generations.

Instead of showing blind faith, young professionals like to shop around and try out different options before making a choice. So another place the Black church often loses people is with the fear based theatrics of fire and brimstone, “you’re going to hell” rhetoric. While fear and shame may have been great motivators for our grandparents, these days most 20- and 30-somethings would call that speech toxic and/or fanatical.

I’m not saying soften the Word of the Lord beyond recognition, but maybe perhaps speak using more inclusive language, shy away from putting down other religions, and make your God feel like a more accessible part of people’s lives rather than a constantly vengeful, all seeing judge.

Some will say all these suggestions are lame and go against everything the church is about. To them I say, “That’s fine. We have other options.”

Be transparent about money

The last suggestion I have for Black churches is pretty straightforward, “Be honest about your money.”

We’ve all heard the jokes about congregations constantly donating money to a church fund that never seems to actually build anything. Or about how flashy pastors show up in luxury cars with fresh gator shoes on while passing around a collection plate to those who are barely making ends meet.

These jokes may be said in jest but they also give a glimpse into the growing side-eye that people are directing at church leaders whose money management skills appear questionable (and at times flat out corrupt). Churches used to be seen as a place of charity and support but for many, it has now turned into a bonafide moneymaking machine where the distribution of wealth is just as inequitable as the American economy.

No one is saying the pastor or First Lady have to show up in rags every Sunday to show their commitment to God. But if we were honest, being more transparent about church funds would definitely go a long way in rebuilding trust.

The days of Creflo Dollar asking people to help him raise money for a private jet are over. So if the Black church sincerely wants to win us back they must be willing to evolve with us rather than just preach at us.