The death of Pamela Turner, who wrestled with a Baytown, Tex., policeman who eventually shot her has been met with anger from activists and representative of her family 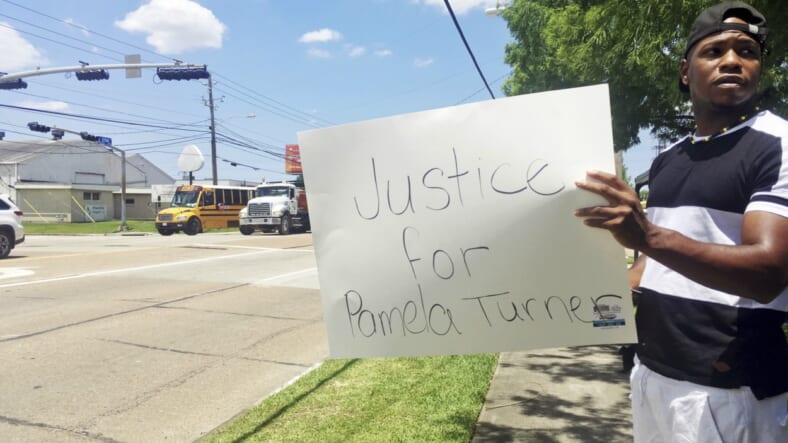 Josh Stokes holds a protest sign outside the police department on Tuesday, May 14, 2019 in Baytown, Texas. Stokes and about two dozen other gathered in response to Black Lives Matter Houston call for demonstrations outside Baytown Police after the police-involved shooting of a 44-year woman. (AP Photo/John L. Mone)

The medical examiner’s office in Baytown, Tex., has said the fatal shooting of a Houston woman who initially told police she was pregnant was a homicide, multiple news organizations are reporting.

The Harris County Medical Examiner’s office has determined that Pamela Turner, 44, died Monday night of multiple gunshot wounds, CBS Dallas reported. In video that went viral, Turner is seen in a struggle with a police officer as she shouts to him “I’m pregnant.” Shots are then heard in the video shared liberally through social media.

Both police and a family member have confirmed since the incident that Turner was not pregnant.

Police in Baytown, a suburb of Houston, have said the officer shot Turner after she grabbed his Taser and shocked him with it.

The civil rights community was stepping in to support Turner’s family.

Rev. Al Sharpton, head of the National Action Network, announced Thursday that he would pay for Turner’s funeral. “Our hearts go out to Ms. Turner’s family and we at NAN will fight for a full and transparent investigation into the circumstances of this heartbreaking tragedy,” Sharpton said on his syndicated radio show.

The family plans to file a lawsuit against the Baytown Police Department and Crump was scheduled to hold a press conference Thursday to discuss it, hyperlocal website Patch.com reported.

Turner was talking outside of her complex when she was approached by the officer, who has not been named publicly. The officer said he recognized Turner and that she had multiple outstanding warrants. The officer has since been placed on administrative leave, according to Patch.

Turner’s family said that she suffers from schizophrenia.

Crump issued a statement regarding the case that was published by Patch.

“Police are sworn to protect society’s most vulnerable citizens, but instead this officer tried to Tase and then killed Ms. Turner,” the statement read. “She was minding her own business in her own neighborhood when the officer shot her dead. We will pursue every avenue of justice for the mourning family who are also the victims of this senseless killing.”

The statement further indicated that the officer involved in the incident is an 11-year veteran and that he acted lawfully. The statement added that Turner committed a felony offense when she allegedly grabbed the officer’s Taser.

“Any officer involved shooting is a tragedy,” the statement read. “TMPA asks everyone to allow the established process for thoroughly investigating these tragic events to unfold and to respect the families of all those involved during this extremely difficult time.”