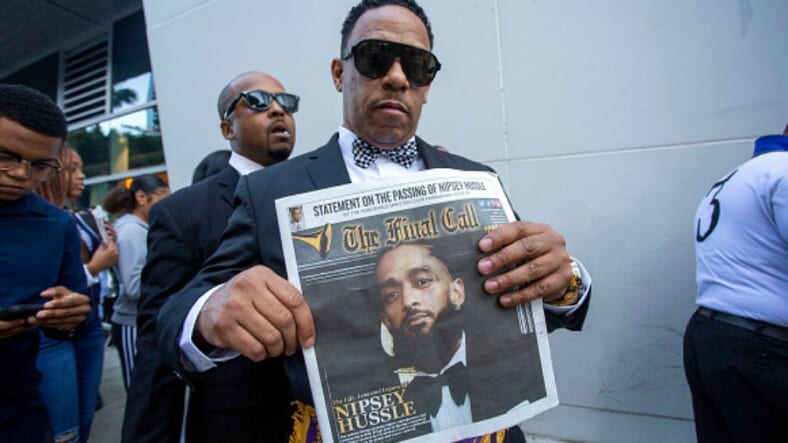 It is being reported that slain rapper Nipsey Hussle‘s alleged killer, Eric Holder, has officially been indicted by a Grand Jury for the fatal attack that took place in South Los Angeles on March 31.

According to TMZ, although the L.A. County District Attorney originally charged Holder with 4 crimes, including premeditated murder, the D.A. opted to have the case revisited by the Grand Jury, which has now indicted the suspect on the 4 previous crimes; murder, 2 counts of attempted murder, and possession of a firearm by a felon.

It’s being said that the D.A. chose to go to the Grand Jury even though they had already charged Holder, in order to skip the preliminary hearing. While the D.A.’s office hasn’t divulged why they chose to skip this step in the process where a judge has to find probable cause in order to make the defendant stand trial, this tactic is sometimes used when there’s an issue with the evidence.

Authorities say the 29-year-old fatally shot Hussle and wounded two other people at the rapper’s Slauson Avenue clothing store. Back in March, L.A. Police Chief Michel Moore told press they believed Holder got into a verbal altercation with Hussle prior to the shooting, stating, “Mr. Holder walked up on multiple occasions and engaged in conversations,” which were about a “personal matter between the two of them.”

Holder, whose mental state has long been a matter of concern, also allegedly pistol-whipped a neighbor just one hour before Nipsey’s murder. Two women have since come forward to submit statements to the D.A.’s Office, accusing Holder of attacking their male friend. They say Holder lashed out after accusing their friend of selling him “laced marijuana.”