Prosecutors say a man accused of a fatal church shooting near Nashville was really seeking revenge for the massacre at Mother Emanuel A.M.E. 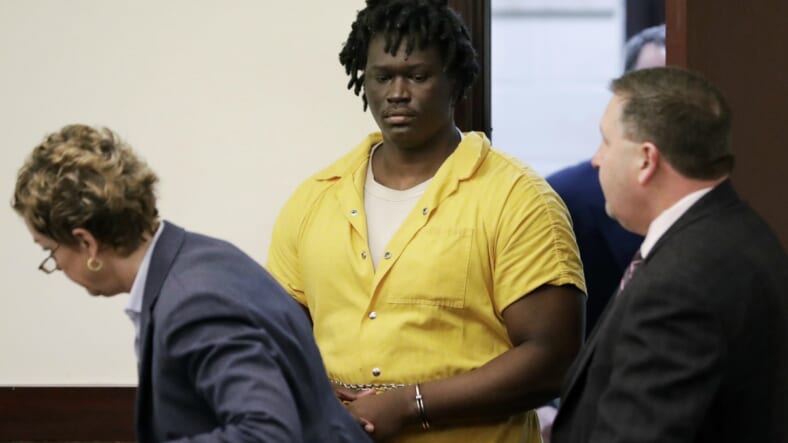 Emanuel Kidega Samson, center, enters the courtroom for a hearing in Nashville, Tenn. Prosecutors have said they're seeking life without parole for 27-year-old Samson, accused of fatally shooting a woman and wounding several people at a Nashville church. (AP Photo/Mark Humphrey, File)

Authorities now believe that a man accused in the 2017 Nashville-area church shooting, which killed one and injured seven, was seeking vengeance for African American churchgoers massacred in 2015 in Charleston, S.C.

According to the New York Daily News, on Monday, prosecutors revealed that they believe Emanuel Kidega Samson was so enraged by the loss of the nine lives taken by white supremacist Dylann Roof at Mother Emanuel A.M.E. Church that he conceived a plot to take his frustration out on his former church.

Nashville Deputy District Attorney Amy Hunter alleges that’s what prompted the 27 year old to open fire on the church he once attended, Burnette Chapel Church of Christ, during a Sunday service in September 2017, with the intention of killing at least 10 white churchgoers.

This claim is substantiated by a note found on Samson’s car that referenced Roof and the Charleston church. Hunter says the Pan-African flag, which is the red, black and green symbol for Black pride was also present.

“Dylann Roof is less than nothing. The blood that 10 of your kind will shed is that of the color upon the RBG flag in terms of vengeance,” the note reportedly said.

Despite the revenge plot’s scope, the single casualty that day was Melanie L. Crow, a 38-year-old wife and mother of two, while seven others were wounded.

“What this case is about is a man who was very sad, very suicidal, and he was looking to die that day,” Jennifer Lynn Thompson, Samson’s lawyer, explained in court Monday.

During a hearing held in April it was revealed that Samson was diagnosed with “schizoaffective disorder bipolar type” as well as PTSD from his abusive childhood. Thompson also pointed out that her client wanted to take his own life and left a suicide note for his girlfriend and a goodbye video for his cousin.