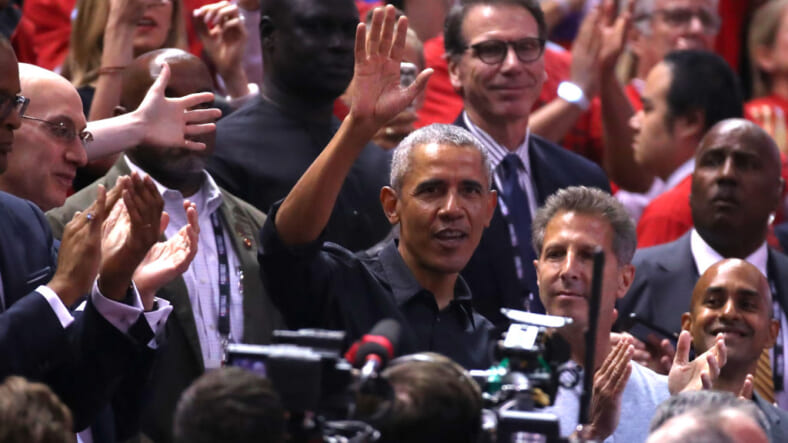 Former President of the United States, Barack Obama waves to the crowd during Game Two of the 2019 NBA Finals between the Golden State Warriors and the Toronto Raptors at Scotiabank Arena on June 02, 2019 in Toronto, Canada. NOTE TO USER: User expressly acknowledges and agrees that, by downloading and or using this photograph, User is consenting to the terms and conditions of the Getty Images License Agreement. (Photo by Gregory Shamus/Getty Images)

On Sunday, the former commander-in-chief, Barack Obama, was hailed like a hero with a standing ovation during Game 2 of the NBA Finals in Toronto, Canada.

Trying to be covert doesn’t come easy for the beloved basketball fanatic and our forever POTUS but he was front and center to watch the Raptors take on the Golden State Warriors.

And while the Warriors ultimately tied the series with the night’s 109-104 win, the real MVP of the night was Obama who received an enthusiastic welcome from the crowd as they chanted “MVP” to remind him that he is and will remain the GOAT.

POTUS was looking cool and casual wearing a black leather jacket as he sat courtside and chopped it up with celebrities and later ESPN sports presenter Michael Wilson, The Daily Mail reports.

And of course, the court-jester Drake couldn’t be outdone and made sure he shook hands and got a hug with the former president as the crazed Raptors fans fanned the flames of his antics.

Drake wore a “Home Alone” movie hoodie with McCaulay Culkin’s character Kevin McAllister on the back with the infamous hands on his face pose followed by a bunch of question marks as a knock to Kevin Durant who has been sidelined with a right calf strain.

As a clapback, the real Culkin hit Drake, tweeting: