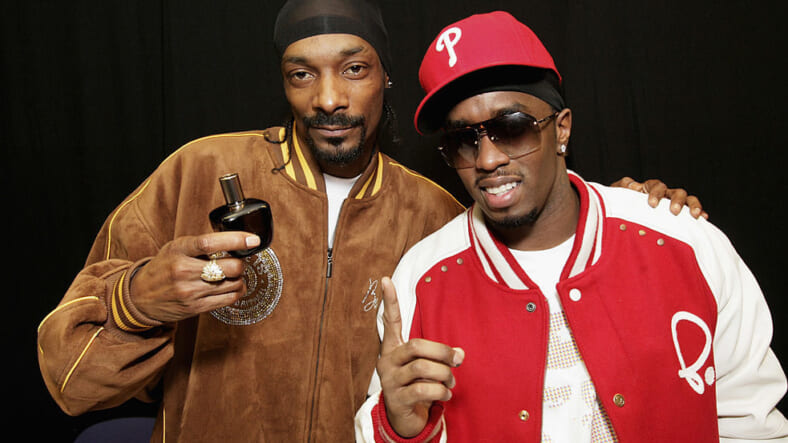 Snoop Dogg sprays P. Diddy with his perfume ‘Unforgivable’ by Sean John backstage at the Hartwall Areena, on March 9, 2007 in Helsinki, Finland. This concert marks the beginning of their European Tour. (Photo by Getty Images/Getty Images)

Hip-hop in the 1990s was an exciting albeit dangerous time. One of the realest moments occurred in 1995 when Death Row CEO Suge Knight took the stage at the Source Awards and threw shade at his rival, Bad Boy Records honcho Sean ‘Diddy’ Combs.

“Any artist out there wanna be [an] artist and wanna stay a star and don’t have to worry about the executive producer being all in the videos, all on the records, dancing, come to Death Row,” Knight said at the time. The diss was in reference to Combs’ knack for #turningup in the music videos of several of his artists.

READ MORE: Who is Alex Fine? Diddy seems salty about Cassie getting cozy with new man in Instagram post

It appears Diddy has not forgotten those words and intends on getting the last laugh. The music mogul threw a party at his New Jersey mansion over the weekend and several hip-hop stars were in attendance, including long-time friend, Snoop Dogg, who, as noted by The Blast, is seen Crip Walking in a clip Combs shared online.

The footage includes a jab at Knight and the comments he made nearly 25 years ago at the Source Awards.

“Look at this n**** Puff all up in the videos and all up in the records,” Diddy included in the post on Instagram, clearly making a reference to Knight’s quote all those years ago.

It’s worth noting, however, that in a 2017 conversation with host N.O.R.E. and DJ EFN of Drink Champs, Combs stated that Knight’s controversial remarks were actually directed toward So So Def CEO Jermaine Dupri.

“We had a conversation,” Combs said on the podcast. “The Tunnel was mine at the time. Let’s not get it twisted. I was ordering garbage buckets full of champagne. The bar is where I would stand and walk around. My feet would not touch the floor. To make the long story short: this is where the after-party was, the world-famous Tunnel, so when I had ran up and asked [Suge], he said, ‘Nah, I was talking about Jermaine Dupri.'”

JD addressed the matter a year later, noting that Diddy’s claims couldn’t be further from the truth.

“Y’all know better than that. I’m the guy that’s been on the forefront of everybody movement. Me and Snoop was like this,” he said as he crossed his fingers. “That’s how Bow Wow came [to So So Def]. Me having beef with Death Row? Never. Suge was in my office, coming to Atlanta, kicking it.”

Knight is the only one unable to give his side of the story. The 53-year old was sentenced to 28 years in state prison last October after he found guilty in an incident that left one man dead (Terry Carter)  and another seriously injured (Cle “Bone” Sloan.)

(The video below contains explicit language)