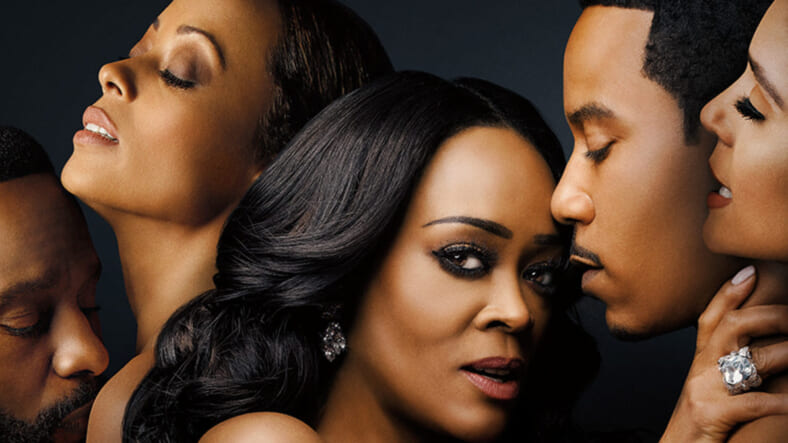 OWN unveiled its sexy new series, Ambitions at the American Black Film Festival (ABFF) over the weekend and the seductive soap that stars Robin Givens is not to be missed.

We caught up with the cast at the 5-day festival in Miami to find out what we can expect from the series that has no shortage of drama and we’re pretty sure it will cause quite the stir.

Here are 5 reasons why Ambitions will be your new guilty pleasure:

Robin Givens was BORN to play Stephanie Carlisle, a woman from a powerful, wealthy family who happens to be married to Atlanta’s mayor. She has her sights set on taking over the family business, but viewers will quickly learn that she has plenty of other problems to deal with as well. It’s been a while since we have seen an actress embody her character so completely and no one lays a bad girl like Givens. (Check out the video above to find out what had her doing the stanky leg during our interview.)

It’s all about the leading ladies.

Ambitions certainly benefits from its ensemble cast but the leading ladies really shine. Robin Givens holds court as the Queen Bee, Stephanie Carlisle and Essence Atkins shines as her fierce frenemy, Amara Hughes. When TheGrio hosted the Q&A following the world premiere at ABFF, both actresses highlighted how empowered they were to play such strong women. They’re wives, they’re mothers, and they’re super successful professionals who have some steamy secrets hiding under their seemingly perfect exteriors.

The cast has some serious chemistry.

Brian J. White plays Evan Lancaster, the mayor of Atlanta with a dark side. He and his wife may seem like the perfect couple in public, but when they’re behind closed doors there’s no telling what will happen between them. Aside from the power couple at the center of all the drama, there’s some bad blood between Stephanie and Amara and if looks could kill neither of these women would make it passed the first episode.

The actors are committed to the project.

Brian J. White revealed he was onboard from the moment he learned Will Packer was behind the series and Robin Givens couldn’t be better for her role as the lead. Essence Atkins (who picked up a huge award at ABFF) is particularly enamored with her character, which makes her portrayal super strong.

” I fell in love with Amara. I just felt like I understood her. I understood what motivated her and I understood what she was fighting for, searching for, longing for….what her ambitions were. I just dove right in,” she says. “I thought this is really gonna be great for me as an artist…she has way more hunger in her than people have gotten to see me play and she’s way more complicated, which I love at this stage in my life.”

The drama is epic.

Expect to see everything from steamy sex scenes, love triangles, dee, dark secrets revealed and passion bursting off the screen of this Will Packer-produced project. Nothing is off-limits, and each episode will keep you guessing.

Ambitions premieres June 18 on OWN.