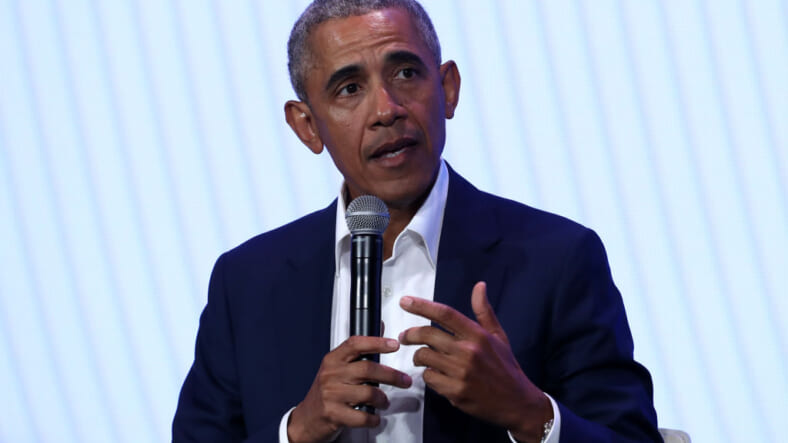 The op-ed piece titled: “We are African Americans, we are patriots, and we refuse to sit idly by,” was published by The Washington Post on Friday and Obama tweeted the link which was signed by 149 African American members of the former President’s administration.

On Saturday, Obama shared the scathing op-ed and praised his former team for taking up the fight against Trump’s rabid racism.

“I’ve always been proud of what this team accomplished during my administration. But more than what we did, I’m proud of how they’re continuing to fight for an America that’s better,” Obama wrote.

And Trump’s nasty attacks have been persistent and non-stop.

He tweeted: “So interesting to see “Progressive” Democrat Congresswomen, who originally came from countries whose governments are a complete and total catastrophe, the worst, most corrupt and inept anywhere in the world (if they even have a functioning government at all), now loudly……

“….and viciously telling the people of the United States, the greatest and most powerful Nation on earth, how our government is to be run. Why don’t they go back and help fix the totally broken and crime infested places from which they came. Then come back and show us how….

“….it is done. These places need your help badly, you can’t leave fast enough. I’m sure that Nancy Pelosi would be very happy to quickly work out free travel arrangements!”

“We stand with congresswomen Ilhan Omar, Alexandria Ocasio-Cortez, Ayanna Pressley and Rashida Tlaib, as well as all those currently under attack by President Trump, along with his supporters and his enablers, who feel deputized to decide who belongs here — and who does not,” the article read.

“There is truly nothing more un-American than calling on fellow citizens to leave our country — by citing their immigrant roots, or ancestry, or their unwillingness to sit in quiet obedience while democracy is being undermined.”

The article also outlined that Trump’s “go back where you came from” rhetoric is a racist trope that is a loud and clear reminder of the ugliness that has long existed in America.

“We’ve heard this before. Go back where you came from. Go back to Africa. And now, “send her back.” Black and brown people in America don’t hear these chants in a vacuum; for many of us, we’ve felt their full force being shouted in our faces, whispered behind our backs, scrawled across lockers, or hurled at us online. They are part of a pattern in our country designed to denigrate us as well as keep us separate and afraid,” the article read.

“As 149 African Americans who served in the last administration, we witnessed firsthand the relentless attacks on the legitimacy of President Barack Obama and his family from our front-row seats to America’s first black presidency. Witnessing racism surge in our country, both during and after Obama’s service and ours, has been a shattering reality, to say the least. But it has also provided jet-fuel for our activism, especially in moments such as these.”

The article continues tearing into Trump.

“We come from Minnesota and Michigan. The Bronx and Baton Rouge. Florida and Philadelphia. Cleveland and the Carolinas. Atlanta and Nevada. Oak-town and the Chi. We understand our role in this democracy, and respect the promise of a nation built by, for and of immigrants. We are part of that tradition, and have the strength to both respect our ancestors from faraway lands and the country we all call home.

“Our love of country lives in these demands, and our commitment to use our voices and our energy to build a more perfect union. We refuse to sit idly by as racism, sexism, homophobia and xenophobia are wielded by the president and any elected official complicit in the poisoning of our democracy.”