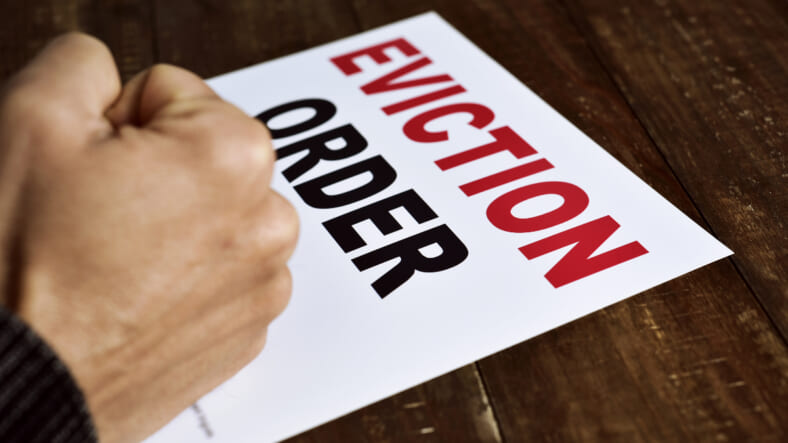 Residents in a California apartment complex are set to be evicted from their households for allegedly shooting a rap video in May “with lyrics espousing gang violence.”

The management company, TerraCorp sent tenants of The Del Monte Manor apartment complex eviction notices in July that accused them of being tied to “criminal or wrongful activity” for participating in an unauthorized and un-permitted film project involving what appeared to be a music video on the premises,” the Monterey County Weekly reports. They are also accusing the tenants of being involved with the video by providing electricity for the production of the video and other help.

The video the tenants appeared in was shot for a song called “We Crippin” that reportedly promotes gang violence. Although the video was quickly taken down after it was released on July 16, Seaside Police kept it in their records.

The site reports that the video was shot in the complex just days after a man named Tremain Calloway was shot to death near the housing complex. Police have already arrested and charged two men with murder allegedly tied to the crime. Police say they also belong to the Crips gang.

Read More: A Tale of Two Homies: Civil Right attorney Lee Merritt remembers his own ties to the Crips and the legacy left by Nipsey Hussle

An advocate for the individuals involved, Princess Pope says the decision to evict the tenants is extreme. Two military veterans and individuals receiving Section 8 housing are among those who are must vacate their homes within 90 days, according to Pope.

“Unless there are allegations of unlawful discrimination and a formal complaint has been filed, HUD has no authority to intervene in ongoing evictions, and as such, does not and cannot get involved, as evictions are legal actions to be adjudicated by a judge through the judicial system,” a HUD spokesperson stated in an email.