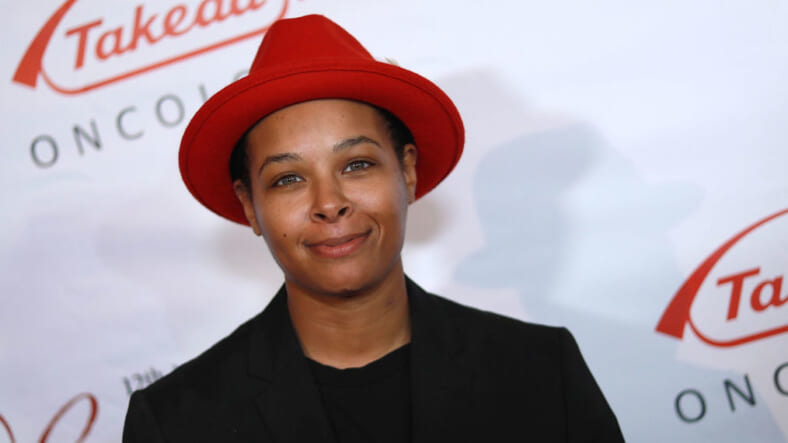 (Photo by JC Olivera/Getty Images)
Tiffany Haddish is doing her best to bring some of her fellow, female comedians on her ride to fame in her new Netflix special, Tiffany Haddish Presents: They Ready. In it, she features six female comedians she has gotten to know and love over the years. Haddish hosts and executive produces the series along with Emmy-nominated Wanda Sykes and Page Hurwitz.
One of the hilarious women you’ll meet on the special is Chaunte Wayans, a less-famous (for now) member of the infamous Wayans family. We caught up with the comedian to find out how she has navigated the comedy world with such a famous last name, and what it’s like to put her sexuality on full display.

Tiffany Haddish explains why she won’t perform in Georgia

Some folks may recognize Chaunte Wayans from Wild’N Out, but she certainly hasn’t reached the level of fame as many of her family members.

“I think in the beginning it was a little bit, more of I was adamant about starting a name for myself. When I first started my stage name was New York. It was so corny. It was about not having people feel like things were coming to me because I am a Wayans. It was like, ‘No, I’m really funny,'” she explains.

“There’s always pros and cons. When I first started I only had five jokes or less and people would use me to get people to come to their shows. I would be doing five minutes and they would have me on the billboard above the headliner. It was like, ‘What is happening right now?’”

Chaunte is the daughter of Elvira Wayans. In one of the first jokes of her set, Wayans jokes that she comes from the “poor” side of the Wayans family.

“They got five kids apiece and all this stuff so they give us opportunities and give us money here and there but they can’t take care of a family of a trillion people and still have money themselves,” she says of her super successful uncles that include Marlon Wayans, Keenan Ivory Wayans, and Marlon Wayans. “My mom and my other aunts and uncles didn’t ‘make’ it. They weren’t famous.”

She also discussed her journey as an openly lesbian comic.

“Being a Black woman and a lesbian has made it a harder road for me. I get a lot of men, even in the gay world, who tell me I should show a little cleavage, or maybe let my hair out or wear some heels. If people saw me wear heels I would probably set myself back further. People have this image of what they think you should look like and the problem with that is people start looking the same,” she says.

“My whole career, I always felt like I will make it if I just stay true to myself. At a certain point, I learned that you could build a real fanbase that believes in your journey and will fall in love with you without you having to change. I tried to get a little sexy and it was very awkward. My jokes didn’t land the same.”

“I get a lot of people that come up to me after my set, even pastors who say ‘ I don’t really believe in what you’re doing but that was funny.’ It’s a way to start a conversation. A lot of people are afraid of things. You’ve got people getting killed or committing suicide because of their identity and so when you are able to connect to somebody else through laughter, that opens up a conversation that hopefully brings new ideas out so these tragic things don’t have to happen,” she continues.

“Being black and being LGBTQ and even being a woman are all things that are important to represent. It allows you to have a voice. That is my main purpose, to be able to show there are different sides to all of us.”