Missing Nip: 5 Touching Tributes made to Nipsey Hussle on his 34th birthday

The culture is still grieving over the passing of the rapper and the tributes continue to pour in. But there are some expressions of fidelity to him that stand out 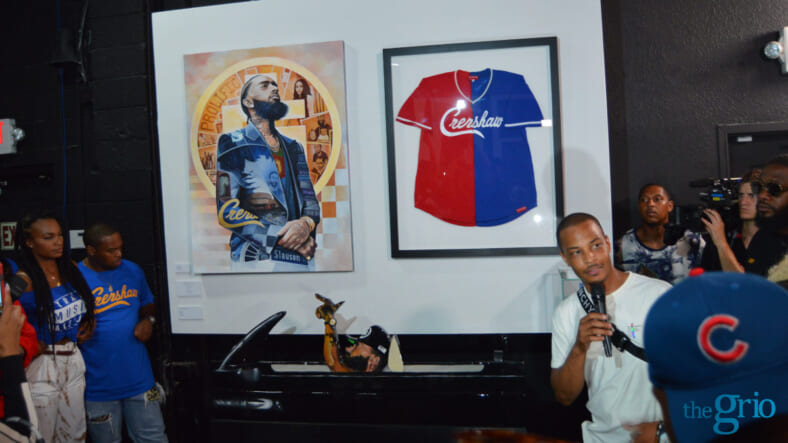 Earlier this year at the BET Awards, T.I. paid homage to Nipsey Hussle saying, "Ermias 'Nipsey Hussle' Asghedom was more than a rapper, a teacher, activist, and philanthropist. He was a revolutionary. His emphasis on the power of equity and ownership of our art led the charge of independence and created a blueprint for up-and-coming artists today to follow." (photo courtesy of Kia Morgan-Smith)

Fans, loved ones and celebrities all took a moment on Thursday to remember and celebrate the life of slain rapper Nipsey Hussle, on what would have been his 34th birthday.

Hussle, whose legal name is Ermias Joseph Asghedom, was fatally shot March 31, in front of his The Marathon store in Hyde Park ovef what was reportedly a conflict between himself and another man, Eric Holder, 29, who was charged with his murder.

In addition to his life as an entertainer, the rapper was also widely applauded for rebuilding his community, brokering peace between rival gangs in his neighborhood, creating safe spaces like Vector90, a 4,700 square foot co-working space, and even launching a program to teach STEM to students in South L.A.

And in return for all that he gave in just 33 years of life, it makes sense that people would feel compelled to give something back. If you haven’t been keeping up with all the beautiful tributes, no worries. Below are a list of our five favorite Nipsey homages (so far).

Nipsey’s legacy as a beloved father, partner, entrepreneur and activist is so etched in the DNA of Los Angeles, it should come as no surprise that communities all over the city made it a point to do something in his honor.

Even though The Marathon posted on its Instagram page that they hadn’t endorsed any gathering or event around the clothing store Thursday, groups of fans were still seen stopping by in the early morning to pay their respects.

Colorful murals continue to pop up all over the city, and Hussle’s birthday started trending on social media before sunrise with the hashtag #TheMarathonContinues.

For Nipsey. Ermias. Son. Brother. Partner. Friend. Artist. Champion. Grateful that he existed. Grateful we walked this vast earth at the same time. In the same city. Grateful that our paths crossed. Grateful for the work and wisdom he gave us. We miss you. Happy Birthday, Nip. xo pic.twitter.com/cNEZHUhiao

Atlanta rapper T.I., opened the Trap Museum back in 2018, and this week in preparation for Nipsey’s birthday, he invited some of his family and famous friends for the unveiling of a three-part exhibit he’s curated Nip’s honor.

The Trap Music Museum and Escape Room have always made it a point to celebrates the life and legacy of some of the most influential rappers of our time by presenting art installations that showcase how the genre has left its mark around the world. So this homage was basically a no brainer.

“It’s very important that we pay tribute and honor our father and brother, Nip because the legacy that he left and the example that he set, obviously, it goes without saying, but it should never go unnoticed,” explained T.I.

Even outside of L.A, the hip-hop community has been hit pretty hard by the loss of its brother, and as a result several rappers and music insiders have taken a moment to reflect on their time with Nipsey.

Amongst them is fellow Roc Nation family member Meek Mill, who posted a really cool throwback photo of him and Nipsey working in the studio.

“Happy birthday to you bro,” he captioned the post. “I know you somewhere doing some cool s**t feeling good!!!! #themarathoncontinues @nipseyhussle”

As much as the world misses Nip, it’s hard to imagine what his family must be going through right now.

“He was a brother, a musician, an entrepreneur, a people’s champ,” Hussle’s brother, Samiel Asghedom, told Newsweek in his first interview following Hussle’s death.

“He was somebody that believed in the process of hard work, determination and just the positivity of somebody staying in the area that he grew up in and making something out of nothing…he was a role model to the community, to the kids, and to the mothers and grandmothers and the community that watched him grow up and seen him as a youngster, (and now) a family man, a father, raising his kids.”

I’ve never had a chance to meet you but your spirit and words touch my soul everyday! And through your music, I’m getting ready for my games, on some Hussle & Motivate sh*t!

His sister, Samantha Smith also paid tribute to her brother via social media by sharing a photo of him with the caption: “The Greatest to ever do it.”

Overall, the family has let it be known that while they appreciate the outpouring of love and support they’ve received during this difficult time, they are choosing to celebrate the day privately.

Last but most certainly not least, there is Nipsey’s girlfriend, Lauren London. When news broke of his death, fans immediately found themselves concerned about how the actress was dealing with the devastating blow.

The couple was together for six years at the time of his death, and have one son, Kross, 2, together, but lived as a beautiful family, including their two children from previous relationships.

Despite her unimaginable grief, London has been a beacon of strength through all this, and took to Instagram this week to reflect on the man who she still considers the love of her life.

“Ermias wasn’t a sad soul,” she continued. “He was a powerful strong magical soul. Today is the day we lift up. Long Live My other half. My beloved King. Ermias. Nip Hussle the Great! I miss you. I love you. Still here holding it UP!”