Black female comedians are having a moment right now, but is it funny?

OPINION: It's time -- long overdue, in fact -- that Black woman comics got their chance to be funny rather than being the punchline 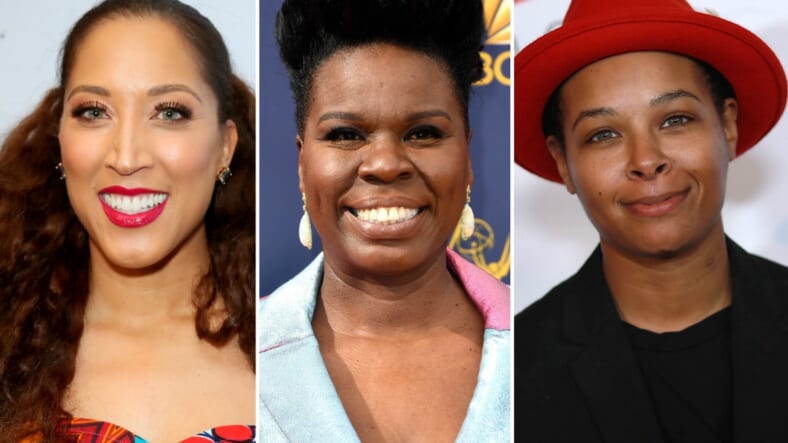 This week Deadline broke the news that Leslie Jones had chosen to leave Saturday Night Live prior to her contract ending. A typical SNL contract stretches for seven years, but every year stars have the option to request an early departure, and this year Jones took that option, to pursue other career opportunities.

When the announcement was first made the knee-jerk reaction from most people I know was, “Oh no! that sucks!”

But then folks paused and conceded, “But wait, I didn’t even know she was still on there.”

Those two conflicting responses pretty much sum up what has always been off about the show’s precarious relationship with women of color, even when we’re there — we’re not really there.

Before anyone points out the one glaring exception to this rule, yes. I also remember the Maya Rudolph glory days of SNL. But using her as some sort of “gotcha” to ignore the diversity issue on this NBC institution is as tone deaf as those who used to say Obama becoming president was proof that America is no longer racist (and we all see how that turned out).

Rudolph lasted her entire seven year contract on the show, but aside from the fact that she is insanely talented, she’s also part of a family with an entertainment legacy and has the sort of Megan Markle biracial appearance that literally gives some white people the luxury to forget they’re even looking at a Black woman when she pops up on their screens.

Aside from her, in the over 44 years that SNL has been on the air they have only ever had six other Black women, and only Rudolph has made it to the end of her full contract. In fact, in 1985, after Lorne Michaels briefly left the show, he returned and invited Black comedian Danitra Vance to join the cast, only to have her play a character called “That Black Girl” — a parody of the Marlo Thomas sitcom That Girl.

READ MORE: Eddie Murphy set to return to ‘SNL’ as host for first time in 35 years

And in 1991, Ellen Cleghorne — who I personally think is hilarious — was promoted to full cast member, only to have her best known recurring role be a character named “Queen Shenequa,” with the entire punchline being that she’s really into Africa.

Time and time again, the show has used Black men as icing, and Black women as a sprig of garnish on top, but whenever you cut the cake, it’s always remained pure vanilla.

So while I don’t at all fault Jones for saying “deuces” and going off to find a place that feels more like home, I am a bit annoyed that a vehicle that’s been used to help so many white and male comics get to the top, still insists on treating us like hitchhikers.

Actually let me correct that statement, when I found out Jones was leaving I found myself momentarily annoyed, but literally five minutes later my phone pinged with a news update that HBO had agreed to renew A Black Lady Sketch Show for a second season.

Now do I think this show is as funny as SNL is when they’re in their sweet spot during election season? No, I don’t. But I also don’t think it’s fair to compare a newborn child to a fully grown adult.

When one watches the first few episodes of this new sketch comedy series it becomes quickly apparent that creator and star Robin Thede is still finding her footing with the format she’s been given. To be honest, one could reasonably argue that she’s more like a female Trevor Noah than the reincarnation of a sketch comedy genius the likes of Keenan Ivory Wayans. There truly are levels to this comedy ish. So while it is evident the show is made with a lot of love, you can’t ignore those moments where Thede’s cleverness and desire to make a social commentary, shines much more brightly than any actual humor.

But here’s the thing though, we can’t ask Black creators to stick their necks out and create “For Us, By Us” content and then bash them during the creative process. We need to be just as patient with our own, as we are with those slow moving cable television dramas that take damn near half a season to get good. In fairness, there are a few sketches of the show that I’ve seen that give me hope about where the ladies will be headed next season.

Coincidentally, the same day it was announced A Black Lady Sketch Show would be renewed for a second season, my friend — who just happens to be a Black female comedian herself — posted (and I’m paraphrasing here), “I love how even people who aren’t fans of the BLSS are turning it on every week out of solidarity.”

For a second I chuckled at that observation because it’s true!

While the reviews for the show’s first few offerings have been mixed, just about every Black person I’ve run into agrees they’re gonna show their support and help boost their ratings because we all recognize what these women are doing on behalf of all of us.

That sense of using a platform to lift up other women is also beautifully demonstrated in Tiffany Haddish’s new Netflix special, Tiffany Haddish Presents: They Ready, a series where she uses her stardom to curate a list of women comics that she has hand picked to share their talents on the streaming platform.

This week, I decided to give Haddish’s show a chance, and chose to watch a set done by Chaunte Wayans, one of the lesser known members of the Wayans family.

“I think in the beginning it was a little bit, more of I was adamant about starting a name for myself. When I first started my stage name was New York. It was so corny. It was about not having people feel like things were coming to me because I am a Wayans. It was like, ‘No, I’m really funny,’” she recently explained to the theGrio.

Honestly speaking, she really is funny as all hell.

Tuesday evening my friend and I sat down to watch her set and proceeded to laugh and cackle through out the the entire episode.

While being a part of comedy’s Black royal family doesn’t necessarily ensure that someone is talented, whatever comedic genes the Wayans clan may have running through their bloodline, this 37-year-old firecracker clearly got an extra hefty dose of it.

The fact that she’s also a masculine presenting lesbian, who masterfully shares her experiences about navigating through the emotional mind field of having relationships with women while still maintaining close (and respectful) friendships with men, is no small feat.

But the way she managed to make so many prickly and potentially divisive topics lighthearted and entertaining, left me so impressed that I actually clapped along with the television audience at the end of her set like a child watching their favorite cartoon.

“If this is where Black women in comedy are headed, I think we’re gonna be okay,” I turned and said to my friend as the credits started to roll. I sincerely do believe that.

Sisters have always been funny, this is nothing new. I’m just relieved we’re finally getting a chance to tell the jokes instead of just being someone else’s punchline.