Jamaican man bringing HONEY into the U.S. detained for 82 days, authorities mistake it for liquid meth 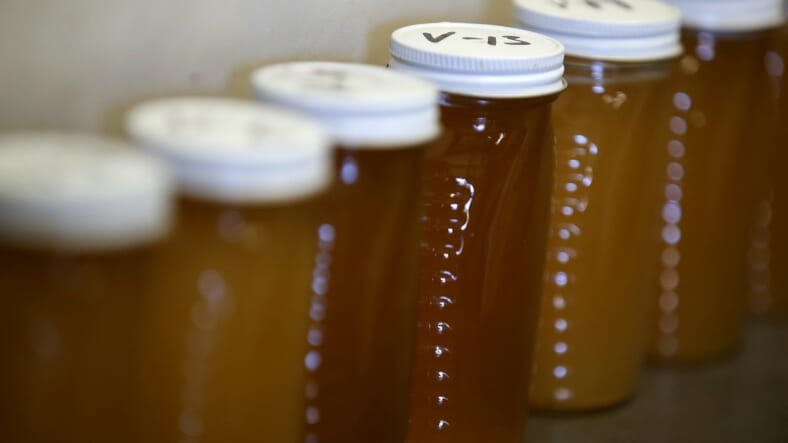 It’s been revealed that U.S authorities detained a Jamaican national for nearly three months after he brought three bottles of honey into the country from the Caribbean island.

According to the Washington Post, on December 29th, customs agents mistakenly thought Leon Haughton was attempting to smuggle liquid methamphetamine in the country after visiting family in Jamaica over the holidays.

READ MORE: Black female comedians are having a moment right now, but is it funny?

But in reality the 45-year-old had just innocently bought three bottles of honey from his favorite roadside stand to bring home with him. When he landed at Baltimore-Washington International Airport, customs agents had a dog sniff his bags but he assumed all they would get a whiff of is the fried chicken meal he had in his bag.

Much to his surprise, he was instead told him they suspected him of transporting liquid methamphetamine.

“I’m 100 percent sure I don’t have drugs. I only have honey,” Haughton recalls explaining to the agents. After they placed him in detention he fainted and was later taken to jail.

READ MORE: Model slams magazine for using photo of a different Black woman in article about her

A man who was returning to the U.S. from Jamaica spent 82 days, more than two and a half months, in jail all because of honey: https://t.co/Xk6DviJDaD pic.twitter.com/O2xnYvBbLj

Both Haughton and his lawyer Terry Morris believe he was targeted due to his race and ethnicity, citing how while in custody he was questioned about a “big Jamaican gang and drug dealing conspiracy.”

Over two weeks later laboratory results from Maryland came back and proved there was no drugs in the confiscated bottles. Rather than let him go, authorities sent the bottles to a second laboratory in Georgia, claiming the first lab was insufficiently equipped to analyze the liquids.

Despite the fact that he had a green card granting him legal residence in the United States, Haughton’s customs arrest set in motion a detention process with immigration, and his case was further delayed by the government shutdown that took place at the beginning of the year.

Ultimately, the lab in Georgia was able to confirm that Haughton was only transporting honey, and on March 21st, the charges were dropped and he was freed after spending a whopping 82 days in custody.

“They messed up my life,” said the father of six who lost his two jobs as a cleaner and construction worker due to his three month absence. “I want the world to know that the system is not right. If I didn’t have strong people around me, they would probably leave me in jail. You’re lost in the system.”

“I’m scared to even travel right now,” he admits. “You’re innocent and you can end up in jail.”

A spokesperson for the state’s attorney’s office maintains they did nothing wrong and there was no error on the part of any agency regarding Haughton’s detainment.