Is Sasha Obama gearing up to attend the University of Michigan next week? 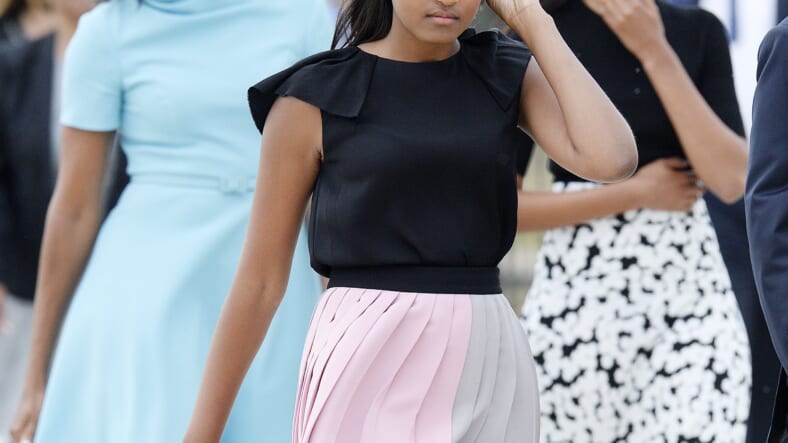 In 2015, Sasha and Malia arrive with their mother, Michelle Obama, to welcome His Holiness Pope Francis on his arrival from Cuba. Photo by Olivier Douliery. Pool/Getty Images)

Sasha Obama is not doing the legacy thing by attending the alma maters of her famous parents as she takes the next steps in her education.

—PHOTOS: Check out all the famous faces cast in ‘Coming To America 2’—

The youngest Obama daughter chose the University of Michigan to attend college starting next Tuesday, according to The Detroit News.

Both Michelle and Barack Obama are Harvard law graduates and their oldest daughter Malia currently there as an undergrad student at the Ivy League institution. As an undergrad, her father attended Columbia University and mom went to Princeton University.

Sasha was reportedly spotted on campus surrounded by a security detail as she attended freshmen orientation like the rest of her peers.

The University of course refused to give out any info on if Sasha is a student or not.

Let’s just hope Sasha keeps some good friends around her who don’t try to sneak pics of her for the gram.

Her sister Malia’s been bombarded with people catching her out living life and enjoying herself while imposing on her privacy while at college.

Last year Malia was snapped sitting together and chatting in Soho with Rory Farquharson who was rumored to be her boyfriend.

Earlier this year, Sasha attended her high school prom, ahead of her graduation from the Sidwell Friends High School in June. Photos show the fresh-faced teen standing arm-in-arm with her date, Chris Milton, who wore a traditional black tuxedo.