Detroit woman shot 11 times by wife after asking for divorce 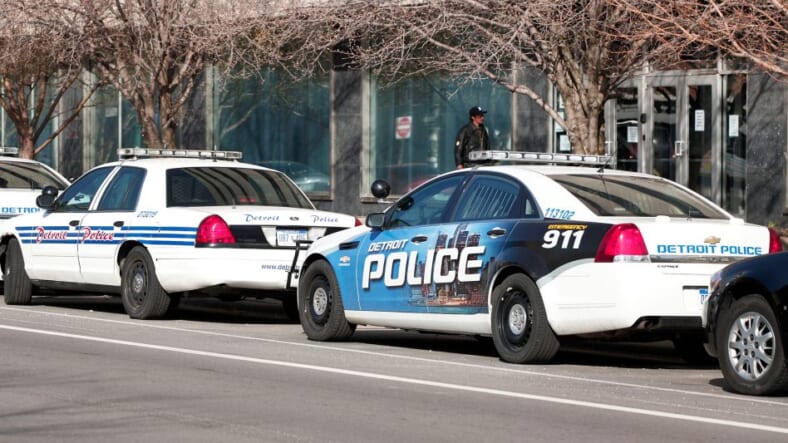 City of Detroit Police vehicles are shown parked in front of their precinct.(Photo by Bill Pugliano/Getty Images)

A Detroit woman was left in critical condition after being shot 11 times by her wife of 12 years after a domestic dispute turned violent.

Airrion Wallace was left fighting for her life after her wife, Tiffany, shot her repeatedly. “She emptied the whole clip into my body,” she told local station WJBK in an interview from her hospital bed

On Monday, just hours after having undergone emergency surgery and two blood transfusions, Wallace detailed what happened to her.

“I was telling her that we needed to get a divorce,” Wallace said, noting that her spouse’s cheating was behind their marital problems. “I can handle a lot of things but I cannot handle infidelity.”

Wallace then went on to describe how the situation escalated, implying that her wife snapped upon receiving the news. “She shot me four times in my vagina, four times in my leg, three times in my stomach,” she said. “I’m like ok. Ok, I hear you, I’m not going to do it… [but] she kept going.

“She wanted me to die because she has always felt if she can’t have me, no one can have me,” she said.

Following the shooting, Wallace managed to escape from her home and asked neighbors for help.

“I had to gather as much strength as I could, to get down my stairs and get outside, because the neighbors had heard it. As soon as I opened the door there was already people out there. I said, ‘Please can you call the police.'”

READ MORE: Driver fatally shot in South Dallas by troopers reportedly pulled over for failure to signal a turn

Police found Tiffany Wallace in front of their home and arrested her. She claimed she shot Airrion in self-defense.  However, she  several criminal charges including assault with intent to murder, assault with a dangerous weapon, domestic violence, carrying a concealed weapon, three charges of felony firearm, discharging a weapon in a building and interfering with a crime report, according to the station.