WATCH | Revolt TV summit had good highlights- but is it the right platform for social justice?

OPINION: Antonio Moore talks REVOLT TV's latest panel: "What we have to get honest with is the limitations that happen when White Capital owns Black media or when Black media isn't Black-owned." 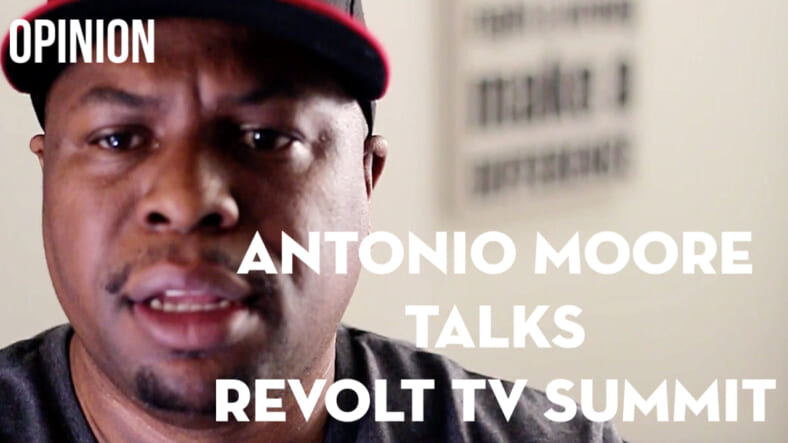 Antonio Moore’s new opinion video series on theGrio discusses economics, politics, and wealth in a way that encourages us to see news of the day in a whole new way.

In this episode, Moore discusses Revolt TV’s (a music and entertainment platform majority owned by Sean Diddy Combs) Revolt Summit, and its role in trying to produce more broad-based content such as conversations circling around social justice.

“Revolt TV was created out of the Memorandum of Understanding signed by Al Sharpton, Marc Morial, and the NAACP,” explains Moore. “That basically was forcing Comcast into diversity. It’s unclear what ownership level that Sean Combs has in Revolt TV. What we do know is it is not 100 percent Black-owned.”

Moore argues that while the Revolt Summit panel itself had some positive aspects, including shout outs by Killer Mike to thinkers such as Moore and Yvette Carnell, there was a huge opportunity to highlight an injustice that organizers missed.

“At the same time, Comcast is attacking the Civil Rights Act of 1866, which essentially forces White America to do business with Black folk on a simple level. You see a Supreme Court case coming to court November 13th, where Comcast is basically trying to dwindle back those rights. Revolt TV has a summit and they do not discuss this.”

READ MORE: AFTER EFFECTS MUST HAVE KEYFRAMES SELECTED FROM ONE LAYER IN ORDER TO EXPORT THEM AS TEXT.

“I think that what we have to get honest with is the limitations that happen when White Capital owns Black media or when Black media isn’t Black-owned, it’s just Black targeting. I feel like in a lot of ways what you fundamentally run up against is that people don’t want to get honest that Black folks got to own Black content and why that’s so important.”

He adds: “In addition, T.I. went into a statement about reparations that was summarily wrong. This is according to economist Sandy Darity [and] all the studies that I’ve done on reparations. You don’t need a flag and a Constitution or to be part of the union to demand reparations.”

“ADOS (African-American Descendants of Slavery) just needs to be ADOS and stand up for reparations. Fundamentally, I believe that this is the problem and the limitation of Black celebrity speaking on Black activism without an undergirding of Black history or Black knowledge.”

“As we move forward, one of the challenges that we all have to have is to ask the question: What is your resumé to be speaking on what you’re talking about? I think for a lot of us if we ask that question, it would lead us to a much better space,” says Moore.

“So, essentially when I see this thing I have to wonder- a station that was built for a music platform trying to now do activism. Is this possible?”