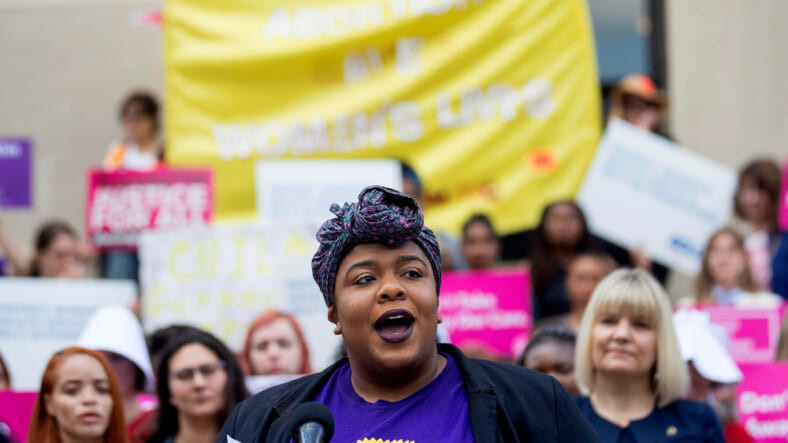 Michelle Wilson, Program Manager for Women Engaged, speaks out against Georgia’s restrictive abortion bill and for reproductive justice at a press conference outside of the Georgia State Capitol following the signing of HB 481 in Atlanta, Tuesday, May 7, 2019. Georgia Governor Brian Kemp signed the bill, surrounded by supporters and Georgia lawmakers, in his office Tuesday morning. (ALYSSA POINTER/ALYSSA.POINTER@AJC.COM)

The Georgia anti-abortion law debate lands in front of a federal judge for the first time today as opponents fight to get the law reversed before it takes effect in January.

The American Civil Liberties Union of Georgia is leading the fight to block the law that was signed by Gov. Brian Kemp in May. They’ve asked U.S. District Judge Steve C. Jones to block the law from taking effect as they battle the case through the courts, The AJC reports.

Back in June, the ACLU filed a complaint saying that the restrictive abortion bill that bans abortions in the state after six weeks, violates a woman’s constitutional rights under Roe v. Wade which gives access to abortion up to 24 weeks.

There’s been an outcry from Hollywood celebs who had blasted state lawmakers for passing the heartbeat bill.

Recently, filmmaker Spike Lee called for Hollywood production companies to leave Georgia over the law that would ban abortions. But Stacey Abrams who lost the bid for governor, and others have been encouraging people to “stay and fight” the law rather than taking business from the state.

The law will go into effect on Jan. 1, 2020, unless it’s derailed by legal challenges.