OPINION: The rapper's attacks on other women in the hip-hop game shows that she's as much a proponent of problematic behavior as anyone else at whom she's pointing a finger 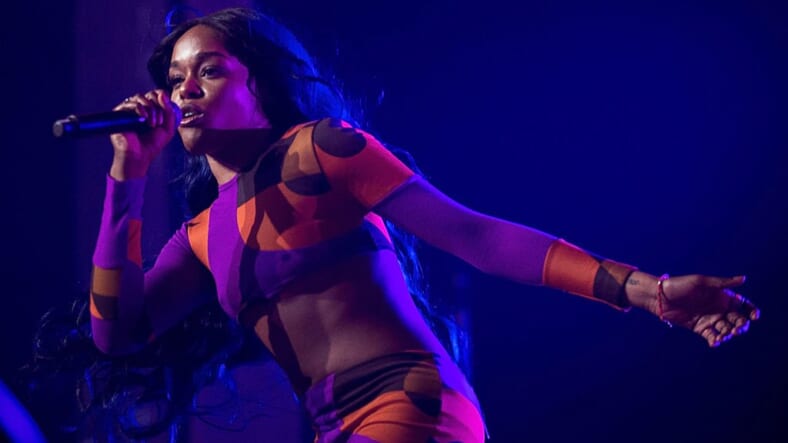 This month pop star turned fashion mogul Rihanna made headlines after she brokered a deal with Amazon Prime to have her Savage X Fenty show streamed on the platform a week after the production.

Just about everyone agreed that the show was a victorious success with women of all shapes, sizes and colors strutting their stuff in a sex-positive display of body confidence and sisterhood.

But one person who did not seem to be swept up in the overall consensus of applause was Azealia Banks, who jumped on Instagram after watching the nearly-hourlong documentary with scathing commentary.

While most praised the show for its inclusivity, stage design and choreography, Banks took several digs at Rihanna’s weight, and called her out for her “bald ass f*cking edges.”

In one of the clips, Banks even goes as far as to say, “We will have no f*cking fat black icons on this f*cking side”.

Azealia Banks has previously made it clear that she’s suffered at the hands of a colorist industry that deifies lighter singers while dismissing their darker and at times more talented counterparts as just side kicks (at best).

While she has a point that this dynamic does exist, that in no way gives her license to turn around and victimize other women who she resents for getting opportunities she believes she was robbed of.

In fact, if this was really about the double standard that women of color experience in the mainstream, why go after Rihanna, a woman who has literally made the beauty industry sit up and expand the range of products for darker complexioned Black women? Isn’t that the exact sort of representation Banks waxes poetic that we need more of?

Well according to her, not really.

READ MORE: Azealia Banks calls out double standard for men in the industry

In fact, in one of her tirades she goes as far as to allege that Rihanna’s whole inclusivity shtick is actually just a self serving ploy to make her new body trendy instead of going on a diet.

“We still want to be skinny Victoria’s Secret angels. We do not want to be f*****g fat Fenty savages,” she says, and then questions why men who she believes to be blatantly color struck, like rap moguls Diddy and Jay Z, are allowed to be “cultural barometers for Black women’s beauty.”

Critiquing Azealia Banks is always a tricky business because she has this habit of making compelling arguments about the world at large, but wrapping those arguments in a quilt of bitterness, anger and vitriol that makes it hard to take the rest of her rants serious.

It’s like that game “2 truths and 1 lie” where a stranger tells you three facts about themselves and you have to make an educated guess about which is a falsehood. Is the hip-hop and the Instagram culture we now find ourselves in deeply rigged to exalt racially ambiguous women while treating more obviously Black women like tokens?

Did Rihanna’s weight gain spark her newfound interest in body positivity? Perhaps. But most body positivity activists became advocates due to their personal experiences as well, so that’s not necessarily a bad thing.

But is Rihanna fat, bald headed and worthy of being dragged while she’s out here slaying every industry she comes in contact with? Definitely not.

READ MORE: Cardi B beefs with Azealia Banks, deletes her Instagram and proves a broken clock is right only twice a day

Banks’ need to always troll people, even fellow Black women who she claims to be speaking out on behalf of, shows that she’s as much a proponent of problematic behavior as anyone else at whom she’s pointing a finger.

Just a few weeks ago she took to social media and lashed out at Lizzo, calling her a “millennial mammy” that that the public and the media has been been glorifying as the butt of an ongoing fat joke.

“Like illiterate Cardi then fat Lizzo. They are really choosing the worst of the black womens crop to advertise America with,” Banks wrote. “I guess they saw us moving too fast with it because if you realize, after Beyoncé became political in ways they didn’t like the elite stopped giving her that top top spot and started cycling out these lessers like Cardi and Lizzo (even Lil Nas X trash ass buckbreak mountain anthem) giving them Beyoncé level accolades while both being no where near the level of black female excellence she is.”

Full confession: When Azealia Banks first came out I was a huge fan of her mixtapes and was convinced that it was only a matter of time before she became a mainstream success. And from what I’ve heard many of her earlier fans felt the same way.

But if there ever was a poster child for “hurt people, hurt people” it would be her. And soon it became clear that she was — perhaps subconsciously — determined to tweet herself out of everyone’s good graces.

Which is a shame. Because underneath all the name calling, public beefs and crabs in a barrel antics, is a brilliant young woman who actually has the kind of talent that could have made her a force to be reckoned with during this current female MC renaissance we’re experiencing.

And while I doubt Rihanna, Cardi B, Lizzo or Lil Nas X are losing any sleep about Banks’ verbal attacks, a part of me still can’t help feeling sadness watching one of our own be so committed to blocking her blessings while blaming everyone else for her self inflicted demotion as just another internet troll who “almost” became a star.

Self sabotage is a helluva drug.