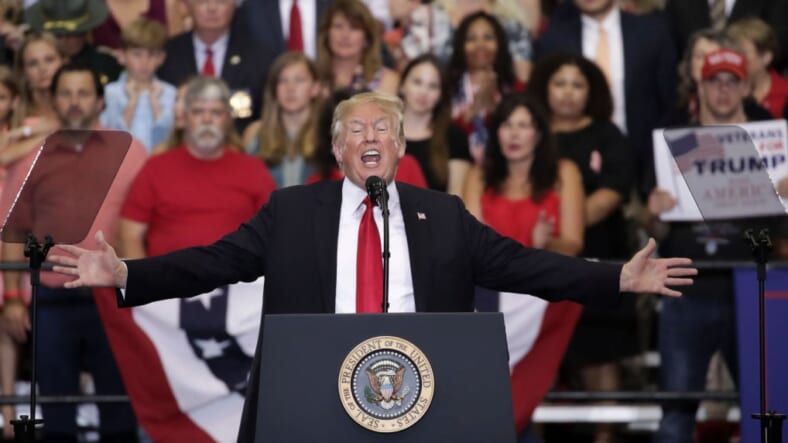 A former New Jersey police chief caught on recordings making racist remarks against Black folks once made his opinion well known during the 2016 presidential election that Donald Trump is the last hope for white America.

“I’m telling you, you know what, Donald Trump is the last hope for white people, cause Hillary will give it to all the minorities to get a vote,” former Bordentown Township Chief Frank Nucera reportedly said during the arrest of a Black suspect, according to a transcript displayed at trial, NJ.com reports.  “That’s the truth! I’m telling you.”

Nucero reportedly resigned as Bordentown Township chief in Feb. 2017 when he learned the FBI was investigating him for hate crimes and other civil rights violations, and K-9 Sgt. Nathan Roohr was the star witness for the feds.

His federal trial on charges of hate crime assault and lying to the FBI kicked off last week, and Roohr testified Monday that during the 2016 arrest of 18-year-old Timothy Stroye, Nucera grabbed his head “like a basketball” and slammed it into a metal door jam.

“[It] made a loud thud,” Roohr said. “I immediately knew it was wrong. I knew I had an obligation to report it,” he added. “This was an obvious excessive force.”

Stroye, who was handcuffed at the time, was accused of sneaking into a Ramada hotel and using the pool with his 16-year-old girlfriend.

“Frank Nucera lunged his hand forward, grabbed Mr. Stroye, the side of his head like a basketball, and slammed it into the metal doorjamb as he entered the doorway,” Roohr said.

The comments about Trump came later, when Roohr mentioned Stroye’s arrest in order to record him talking about it under the ruse that the victim’s family planned to sue the police department.

“I’ll tell you what, it’s gonna get to the point where I could shoot one of these [expletive],” said Nucera, who was complaining while speaking about Stroye’s girlfriend’s aunt, who reportedly begged officers to handle her niece with care.

Prosecutors say Nucera has a history of making racist remarks, and several cops provided receipts in the form of tapes of him spewing racial slurs, including one in which he states: “It’s gonna get to the point where I could shoot one of these [N-words].”

In another recording he compares Black people to ISIS.

“The conduct alleged is a shocking breach of the duty of every police officer to provide equal justice under the law and never to mistreat a person in custody,” U.S. Attorney William Fitzpatrick added. “As a result, the former chief of police is now charged as a federal criminal defendant.”

If convicted, Nucera faces up to 20 years in prison and will forfeit his $8,800 a year pension.

I know there’s A LOT going on both nationally & internationally, but this should be getting much more attention …

Oh, and btw, this is the same police dept. I tried to have investigated years ago after my dad’s death. https://t.co/EQ6J40pvq5

I want you to know this man. Meet former Bordertown, NJ Police Chief, Frank Nucera Jr., who is currently on trial for a hate crime in 2016 where he slammed a black teen’s head into a door. Nucera called Trump the “last hope for white people.” He was the Chief. Let that sink in. pic.twitter.com/UFlB2FyIqB

The latest from the Frank Nucera hate-crime assault trial today! Kudos to @PhillyInquirer photographer Jose F. Moreno who snagged a photo of the defendant, who managed to elude the media outside the courthouse for two weeks! @rolandsmartin @WesleyLowery https://t.co/MKoil3hL5N