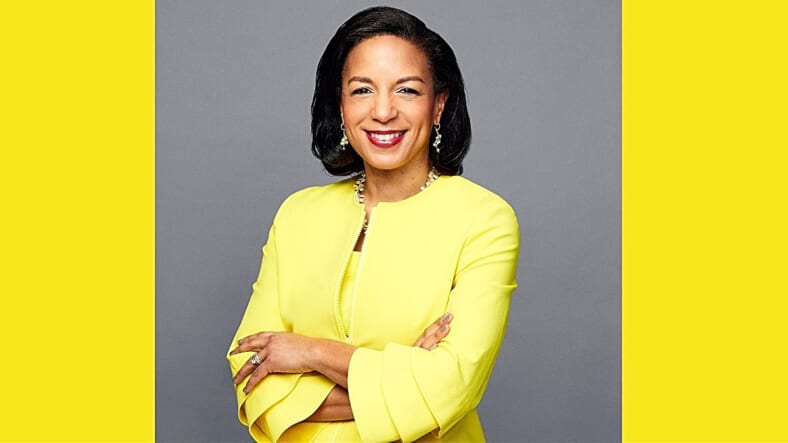 One of the most refreshing aspects of President Barack Obama‘s legacy is the fact that he surrounded himself with intelligent, thoughtful women who possess some of the most strategic minds in our government’s history. No one fits that paradigm more than Obama’s former National Security Advisor and U.S. Ambassador to the United Nations, Susan Rice.

Throughout her years at the White House, Rice set the tone for national security as a serious defender of American democracy and an ardent champion of Democratic politics. In her 500-page memoir, “Tough Love: My Story of the Things Worth Fighting For” (Simon & Schuster) the 54-year diplomat, wife, daughter, sister, and mother of two, carefully details what it was like being a Black woman working in foreign policy as well as providing insight into some of the most pivotal moments of her personal life that led up to enormous professional accomplishments. She also talks about the bewildered haze that the Obama administration embodied as they turned over the White House to the Trump administration.

Ambassador Susan E. Rice talks to theGrio about her new memoir, “Tough Love: My story of the Things Worth Fighting For.” (Photography by Christopher Patey,)

Her story begins with her details of her ancestral lineage starting with a paternal great-grandfather who was born into slavery in South Carolina and a maternal grandfather who immigrated to Maine from Jamaica. Her foundation is constructed by hard-working, tenacious people who understood struggle and sacrifice, so that by the time she was born, her affluent, Washington D.C. based family, provided Rice and her younger brother, John, with the stability of money, key connections and a prime education.

As President, I leaned on @ambsusanrice’s experience, expertise, and willingness to tell me what I needed to hear. In her memoir, Tough Love, you’ll see why. It’s a tribute to American leadership—and a unifying call for us to do our part to protect it. I hope you’ll read it.

Unfortunately, her parents’ turbulent relationship (including an affair, nasty custody battle, and subsequent divorce) made home life more unbearable. Although both they are now both deceased, Rice made sure to get her family’s blessings before exposing her early troubles.

“My immediate family, my kids, my husband, my brother, they all were active participants in this process. They read it. They gave me feedback. They were very helpful and supportive and in a couple of places they suggested some revisions,” said Rice.

“They were really generous. They really didn’t try to change the nature of what I was saying. It was especially important to me because I do write about my kids quite a bit that they be OK and also it was important that my brother be OK because we write about our parents who we were both very close to, who were extraordinary people, but they’ve both passed. I wanted to make sure he was fine as well.”

Rice also delves into moments of self-discovery in college as she wrestled with her own racial identity. Growing up the daughter of two college-educated, Black professionals, her parents preferred she come to her own conclusions of what it means to be Black in America, but were always there to whisper the mantra of working twice as hard to be just as good in her ear. Her journey to that awareness may be different from others, but Rice knows all too well what it feels like to be the “only” in the room.

Discovering a passion for international travel and foreign affairs early in her career, Rice went on to work under President Bill Clinton’s administration before becoming one of President Obama’s most trusted advisors. Labeling herself a progressive, Rice has also been public about some of the challenges in having a 22-year old son, who has decided to align himself with the Republican Party.

“My husband and I are pragmatic progressives and our son is on the other side to the right. We taught our kids to be independent thinkers, to be confident in their views, and to stand up for what they believe. Unfortunately, that’s what happened,” said Rice with a smile.

Thanksgiving day at the Rice house has got to be lit. Especially, now that Rice has been so public about her own disdain for Donald Trump and the allegations of colluding with the Russians (who targeted Black voters) to interfere in the 2016 Presidential election. There’s also the most recent allegations of covert dealings with the officials in the Ukraine and Turkey. Through it all, Rice implores Black voters to pay attention as we roll into the next year’s vital election period and focus on what’s really at stake.

Check out Rice’s memoir, “Tough Love: My Story of the Things Worth Fighting For,” and our interview above for more on Rice’s new book and why she believes Donald Trump has got to go.

Wendy L. Wilson is the managing editor at theGrio. You can follow her rant, raves, and reviews on Twitter @WendyLWilson_