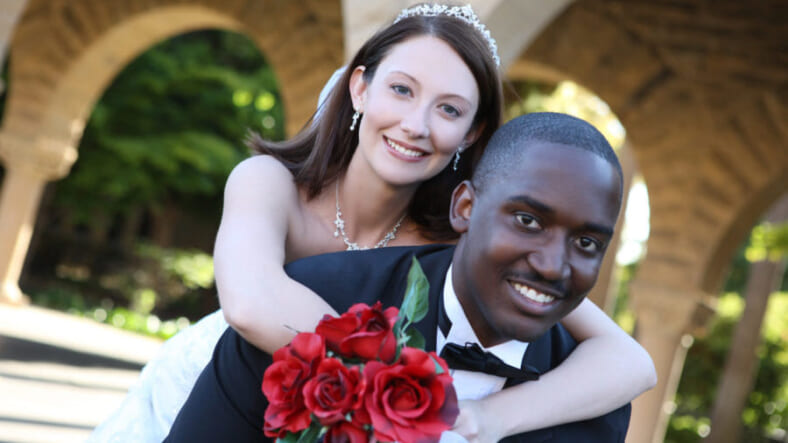 Even though the Supreme Court prohibited Virginia from banning interracial marriage in the 1967 Loving v. Virginia case, Virginia is one of eight states that continue to ask couples to list their race before they are allowed to marry. (Adobe Stock)

More than 50 years after the Supreme Court struck down a Virginia law banning interracial marriage, Virginia is still requiring couples to identify their race before approving marriage licenses — a stipulation that prompted three couples to file a lawsuit against the state.

The couples filed the suit on Thursday in the Eastern District of Virginia, accusing the state requirement of being “offensive,” “unconstitutional” and “reflective of a racist past,” according to NBC News.

Sophie Rogers and her fiancé, Brandyn Churchill — one of the couples in the suit — tried to obtain a marriage license in the Rockbridge Circuit Court clerk’s office but were told that if they failed to list their race, they would not be receiving a marriage license in advance of their Oct. 19 nuptials.

Ashley Ramkishun and her fiancé, Samuel Sarfo, were told the same thing. The couple, who met in Virginia, don’t think it’s right to be forced to divulge their racial identity to get a marriage license, according to the suit.

Couple Amelia Spencer and Kendall Poole also hope to marry in Virginia “but not if [they] must label [themselves] with a race,” NBC News reported from the suit.

So far, all three couples have been denied a marriage license simply because they won’t check a box and state their race, the suit alleges.

“Plaintiffs deem the requirement of racial labeling to be scientifically baseless, misleading, highly controversial, a matter of opinion, practically useless, offensive to human dignity, an invasion of personal privacy compelling an unwanted public categorization of oneself, and reflective of a racist past,” the lawsuit states, according to NBC News.

READ MORE: U.S. Circuit Court rules it is legal to refuse jobs to people with dreadlocks

In the lawsuit, the couples seek “reasonable costs,” which include covering attorney’s fees. In addition, Rogers and Churchill are hoping a judge will prohibit the clerk from denying them a marriage license so that they can still get hitched next month.

Even though the Supreme Court prohibited Virginia from banning interracial marriage in the 1967 Loving v. Virginia case, Virginia is one of eight states that continue to ask couples to list their race before they are allowed to marry, according to the lawsuit. The other states include Alabama, Connecticut, Delaware, Kentucky, Louisiana, and Minnesota. In New Hampshire, a court clerk fills out the information pertaining to a couple’s race.

What Virginia needs this information for is anyone’s guess. So much for the idea of a post-racial America.