LisaRaye On Nicole Murphy Response: “She Might Wanna Come See Me”

The ’The Player’s Club’ actress contends that Murphy also slept with her husband while McCoy was married to him. 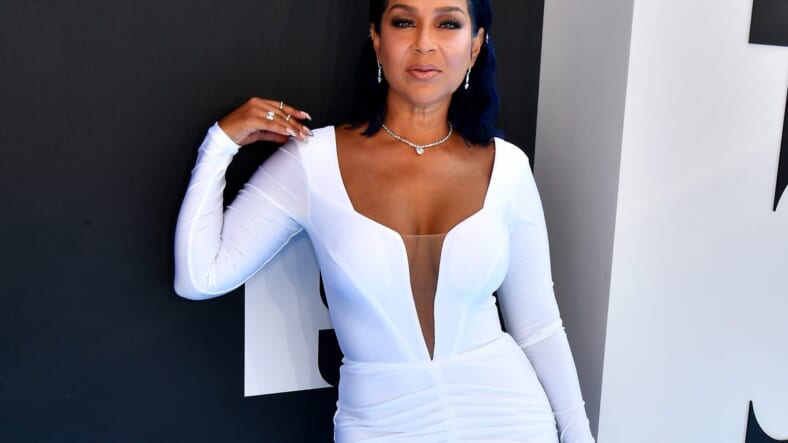 LisaRaye McCoy is still dragging Nicole Murphy’s tapered edges, and claiming she had an affair with her ex-husband Michael Misick.

Murphy flatly denied the claim that she had a fling with a married man when she appeared on The Wendy Williams Show.

However, The Player’s Club actress has thrown down the gauntlet. OK Magazine reports that McCoy said if Murphy has a problem with her account of an alleged hook up between her and her ex-Misick (while they were still married), she might want to have a “face-to-face.” McCoy says that the beautiful vixen “might want to come see me.”

“She [Nicole] did this play on words. ‘I did not break up LisaRaye’s marriage.’ It’s like, nope. No. I didn’t say that. I never said that you broke up my marriage, that ain’t what I said. So you know, I’m going to let her play on words on that and she might want to come see me, she might see me and tell me that face-to-face. I would accept that,” LisaRaye, 52, explained Tuesday on The Rickey Smiley Morning Show.

Murphy has been on the defense battling against claims that she’s a hot mess of a homewrecker after she was caught on camera kissing up on Training Day director Antoine Fuqua who is actively married to actress Lela Rochon.

When the news broke, McCoy stirred the pot and accused Murphy of trying to take her husband too.

“Gurl @nikimurphy you went after @iamlelarochon husband too? … SMH so wrong … again!” she wrote on Instagram.

Murphy then went on an apology tour after getting blasted online for kissing Fuqua.

“Without going into the entire situation, I want to apologize to my family, and to [Antoine’s wife] Lela [Rochon] and to the Fuqua family for what transpired. It was not my intention to be in this situation. I do not condone women kissing or interacting in any way inappropriately with a married man. I too was once married and I would never intentionally undermine another woman, despite what has been written,” Murphy, 51, said in a statement.

McCoy’s sister rapper Da Brat who co-hosts the show has also confirmed that she had knowledge Murphy had a thing going with McCoy’s ex, former chief minister of the Turks and Caicos Islands.

“Absolutely. When my sister was the First Lady of Turks and Caicos, absolutely. Absolutely. It was a couple of them hoes that did that,” the rapper said July 24 on Dish Nation about Murphy.

However, on September 24 while on Williams’ show, Murphy denied interfering in McCoy’s marriage to Misick.

“It says I broke up someone’s marriage, which is absolutely false. I never did that,” Murphy said.  “You are talking about when LisaRaye got involved in said you slept with her husband?” Williams asked. “It’s not true,” Murphy replied.

Grio fam, do you think LisaRaye is right to continue to drag Nicole Murphy?