SNEAK PEEK: Here’s what to expect on season 12 of ‘RHOA’

RHOA returns for Season 12 on November 3. 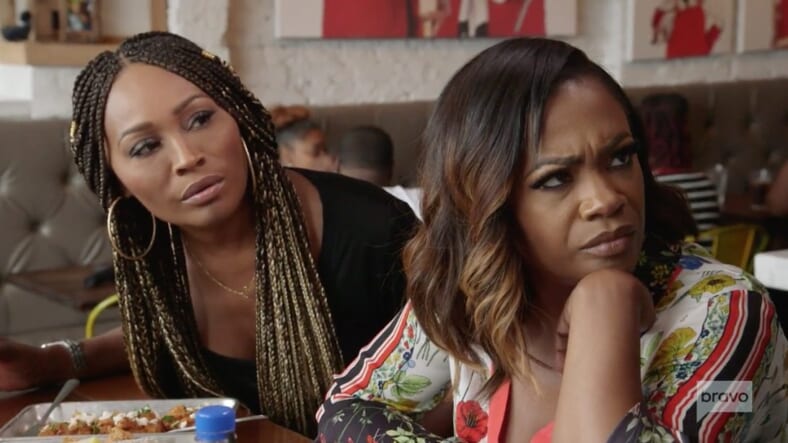 It’s almost time for the ladies of Real Housewives of Atlanta to return to the small screen for the show’s twelfth season and it looks like fans are in for an explosive ride. Several of the ladies of RHOA have babies on the brain, with Porsha Williams, Kenya Moore, and Eva Marcille toting infants these days. Kandi Burruss is awaiting the arrival of her baby via surrogate, and we’re guessing motherhood may show us some sides to the ladies we have never seen before.

Aside from the little ones, romance is going to play a big part this time around. We know Cynthia Bailey is planning her wedding to Mike Hill while Kenya Moore is going through a split with her spouse of two years, Marc Daly. We’re not sure where Nene Leakes stands with her hubby Gregg these days, but chances are we will soon find out. In one clip, we hear her ask him how he feels about open marriages, which means a change could be coming soon.

Porsha Williams seems to be working on things with her former fiance, Dennis McKinley, but if this sneak peek is any indication, she has a few big bumps to get over before she tries again.

In the season premiere, we see that McKinley’s alleged mistress, Sincerely, serves up an unexpected surprise when she stops by to spill some tea on Eva, Kandi, and Cynthia while they’re dining at OLG.

Kenya Moore opens up about split from husband: “I’m not a fighter”

That’s just the tip of the drama-filled iceberg. Expect to see some serious fights between the ladies and a truly explosive issue between Cynthia and Nene…again. One pair we don’t expect to see fighting it out are former frenemies Kenya and Porsha. In fact, the new moms seem to be closer than ever despite the rocky road they have been on since the beginning.

Check out the sneak peek:

Season 12 of Real Housewives of Atlanta premieres November 3 on Bravo.