TRAILER: Jordan Peele brings Al Pacino to the small screen to strike back at Nazis 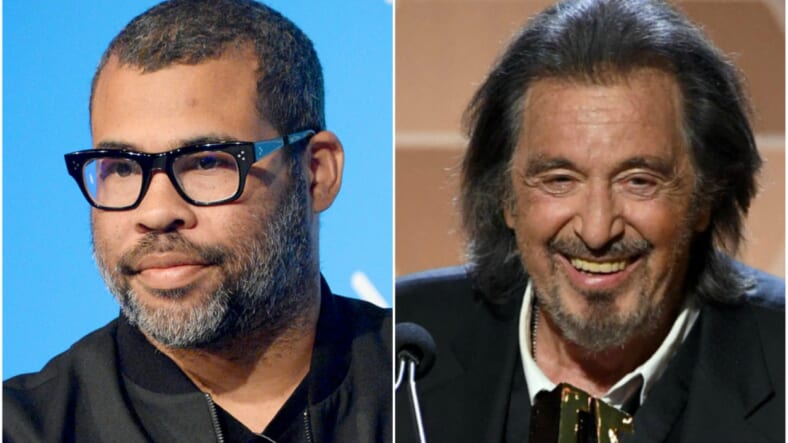 What happens when you team up Jordan Peele, one of the most talked-about Black directors of the past few years, with Al Pacino, one of the greatest actors of all time?

Well, you don’t get The Godfather, Part IV or Scarface 2, but apparently what you do get is Hunters, a 10-episode thriller coming to Amazon Prime Video about a group of Nazi hunters trying to capture a group of surviving Nazis from World War II living among us in 1977 New York who are planning to create a Fourth Reich in the United States.

The new show was announced earlier this year and now there’s a trailer of the action coming next year.

Peele’s Monkeypaw Productions, which gave us 2017’s Get Out, which earned him a Best Original Screenplay Oscar and this year’s Us, is launching the series.

Pacino, who we all know as reluctant gangster Michael Corleone from The Godfather films and as oft-quoted anti-hero drug dealer Tony Montana in Scarface, along with his Oscar-winning turn in Scent of a Woman will lead an A-list cast that includes Jerrika Hinton (Grey’s Anatomy, The Roommate), Ebony Obsidian (If Beale Street Could Talk), Henry Hunter Hall (When They See Us, Harriet).

The show was created by David Weil who will write the script and co-executive produces with Peele. “When David Weil first shared ‘The Hunt’ with me, I immediately knew that we had to be involved,” Peele said in a press release in May. “It’s cathartic. It’s noir. It’s frighteningly relevant. It’s exactly what I want to see on television. I am thrilled to be working with Amazon in bringing this incredible vision to the world.”

The story synopsis goes as follows:

Inspired by true events, HUNTERS follows a diverse band of Nazi Hunters in 1977 New York City who discover that hundreds of escaped Nazis are living in America. And so, they do what any bad-ass vigilante squad would do: they set out on a bloody quest for revenge and justice. But they soon discover a far-reaching conspiracy and must race against time to thwart the Nazis’ new genocidal plans.

Check out the preview trailer below.