She’s Just Like Us: Michelle Obama had insecurities that her 2019 book and tour would be a flop

Our Forever First Lady talks to PEOPLE magazine about her true feelings. 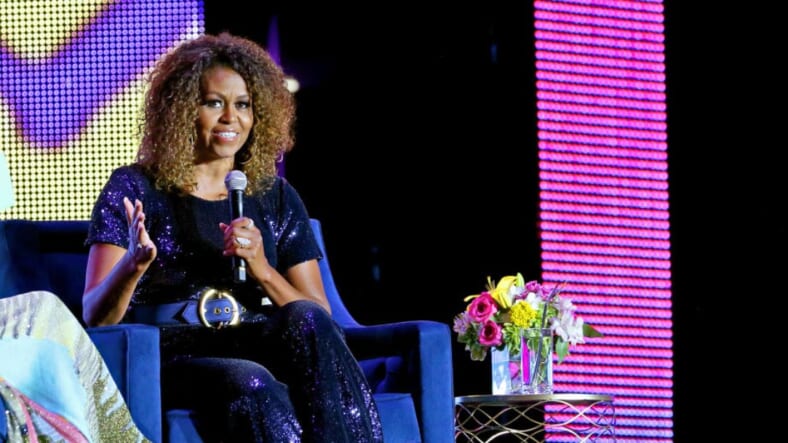 Michelle Obama expresses her concerns about the potential success of her 2019 memoir, “Becoming, ” and book tour saying she doesn’t feel like a rockstar. (Photo by Bennett Raglin/Getty Images for ESSENCE)

Former First Lady Michelle Obama is doing like many other people right now as she reflects on the year past in hopes of being ready for the year to come. Mrs. Obama had an excellent year where she sold 11.7 million copies of her memoir, Becoming, and 375,000 tickets for her supporting tour.

Mrs. Obama acknowledges her 2019 success but when speaking to PEOPLE, as one of the four women chosen as “2019 People of the Year,” she revealed that she has not easily adapted to a “rock star” status everyone holds her to.

“If you saw me on most days, in my sweats or workout clothes, you’d see that I don’t make a very good rock star. Of course, life feels a little different than it did while we were in the White House,” Mrs. Obama said.

Surprisingly, Mrs. Obama also admits that she had thoughts that her book and tour wouldn’t necessarily be as successful as they have been. Fears started to set in during the first stop on her tour which was in her hometown of Chicago, where she appeared at the United Center. She attributed her concerns to being out of public eye and the White House for the past two years.

“I still remember waking up in a bit of a panic the night before my first tour event in the United Center in Chicago, this huge basketball arena. Were people really going to come? Was it going to be any good?,” said Obama.

Michelle Obama’s eye-popping 2019 included the 11.7 million sales of her memoir, Becoming, and a sellout book tour. And as one of PEOPLE’s #PeopleOfTheYear, she’s looking back on the “panic,” vulnerability and gratitude of her record-setting year. ❤️ Tap the bio link for the full story. | ?: @millermobley

“I recognize now that the memoir and the tour were really different than what I’d done before — I wasn’t promoting a policy or rallying votes; I was out there, alone, talking about my feelings and vulnerabilities,” she said.

“That’s enough for anybody to lose a little sleep.”

After the first appearance, she would go on to do an additional 30 dates, giving away tickets to charities and students in each city she appeared.

The book wasn’t the only new thing that required an adjustment for Mrs. Obama over the past year. In the interview, she also discloses becoming “a little emotional” when dropping her daughter Sasha off to college. The Detroit News details Sasha is a student at the University of Michigan after she was seen moving into a dorm.

Mrs. Obama has also earned her first Grammy nomination for the audio version of her book, will release her first documentary in a production deal with Netflix this year and is considered one of the most influential and admired women in the world.