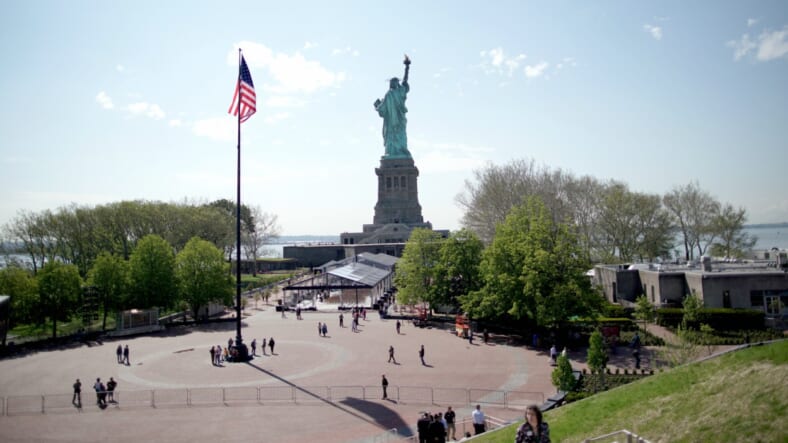 The Statue of Liberty has long been thought of as a monument that welcomed immigrants from all over the world. But its museum points out that it was actually meant to commemorate the end of slavery.

The museum located on Liberty Island in New York Harbor, which opened in May, brings the history of the monument alive. It contains the original torch from the 1890s inside, a copper replica of Lady Liberty’s face and recordings of immigrants remarking about their first view of the monument.

READ MORE: Statue of Liberty protester learns her fate after conviction for trespassing

But according to a May story in The Washington Post, the museum also notes Ellis Island, a station for inspection where immigrants would pass through, didn’t open until 1892. Its opening date was six years after the statue was first unveiled in 1886. “Give me your tired, your poor, your huddled masses yearning to breathe free,” which is from a famous Emma Lazarus poem and etched on a plaque that didn’t arrive until 1903.

The monument was envisioned by Édouard de Laboulaye of France, an expert of the U.S. Constitution and the president of a committee that would disburse raised funds to freed slaves, according to engineer Yasmin Sabina Khan who wrote the book Enlightening the World: The Creation of the Statue of Liberty.

The love Laboulaye had for America was said to have increased more after slavery was abolished. He would go on to call a meeting of French abolitionists to discuss the monument as a gift to recognize the importance of the freeing of slaves.

The creation of Lady Liberty was assisted by sculptor Frederic-Auguste Bartholdi who created her with broken shackles, signaling the end of slavery, in her left hand. The New York Times said her face was created in the image of freed Roman slaves, her face was scultped to resemble and Egyptian woman, according The Smithsonian. The chains of the final version were placed near her feet.

Another story of the creation of the statue cites abolition as a reason that just got lost through history.

“One of the first meanings had to do with abolition, but it’s a meaning that didn’t stick,” said Edward Berenson, New York University history professor and author of the book The Statue of Liberty: A Transatlantic Story.

READ MORE: Nearly a century after a brutal murder, Chicago’s only lynching victim gets memorial

The statue was completed by Bartholdi in 1884 in Paris before being reconstructed in New York and unveiled on Oct. 28, 1886. The ceremony featured fireworks, a military parade and an unveiling of the face but according to Berenson “the original meaning of the abolition of slavery had pretty much gotten lost.”

Berenson would also detail how Black newspapers would rally against the statue as hypocritical. An editorial in the Cleveland Gazette suggested to: “Shove the Bartholdi statue, torch and all, into the ocean until the ‘liberty’ of this country is such as to make it possible for an industrious and inoffensive colored man in the South to earn a respectable living for himself and family.”