This May 6, 2019 file photo shows Solange Knowles at The Metropolitan Museum of Art’s Costume Institute benefit gala in New York. Knowles will be the first recipient of the Lena Horne Prize, to be awarded in a ceremony at New York’s Town Hall on Feb. 28. (Photo by Evan Agostini/Invision/AP, File)

Lena Horne was a fierce advocate for civil rights in her later years, but that part of her legacy is often pushed behind her glamorous image. Her good friend Harry Belafonte hopes that a new award in her honor will push that aspect of her life front and center.

“She had a huge burden. She was Black, she was hugely popular, and she had to continually safeguard that environment of hers, the celebrity,” he said in a recent interview with The Associated Press. “Her outspokenness didn’t come until later in life.”

He added: “That last sparkle of life was the place where she felt most nourished. She found her voice, socially and politically, beyond the enormous notoriety she had as the most beautiful black women in the universe, and one of the great singers.”

The newly created Lena Horne Prize for Artists Creating Social Impact was announced last month. It was revealed Friday that Solange Knowles would be the first recipient of the prize to be awarded Feb. 28 in a ceremony at New York’s Town Hall. Besides the honor, the singer and artist will receive $100,000, which she plans to donate to the Project Row Houses in Houston, an art nonprofit dedicated to uplifting and engaging the Black community through the exploration of its art, culture and history.

READ MORE: “Queen & Slim”: 4 Things we could all learn about critiquing Black art

In a statement, Knowles said she was beyond humbled” to receive the award and noted that at 12, she played Glinda the Good Witch in “The Wiz,” the very role Horne played in the 1978 film.

“It was then that I learned about Lena’s dedicated activism and fearless integrity as a woman and groundbreaking artist,” she said. “I am honored to be receiving an award that bears her name and continues her legacy of using the arts to inspire reflection and evoke change.” 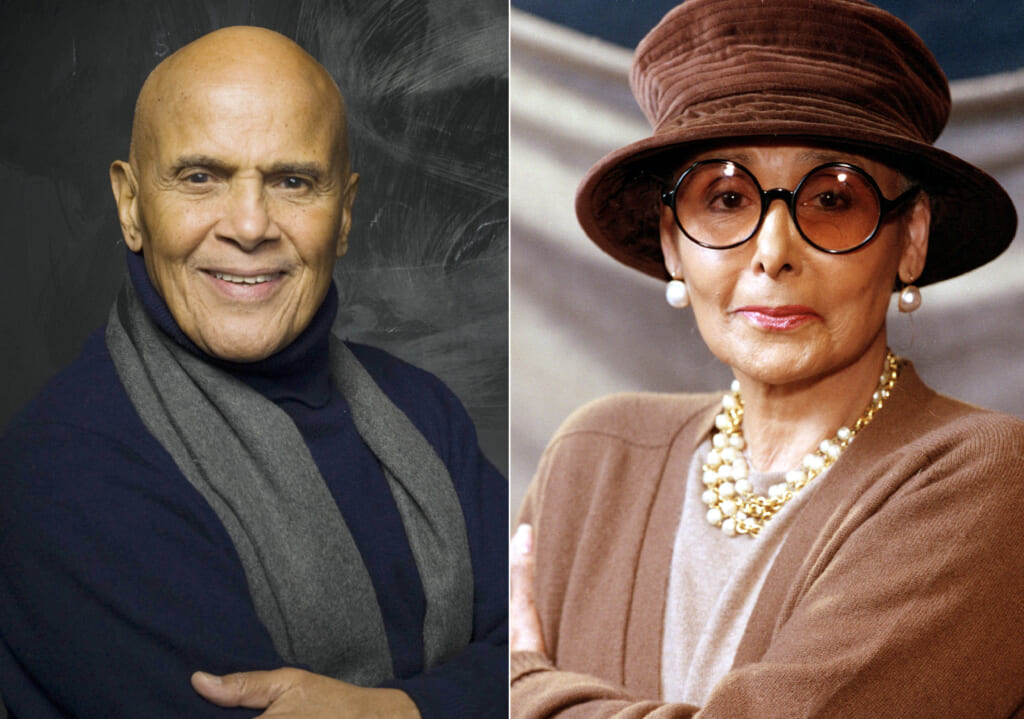 Actor, singer and activist Harry Belafonte during the 2011 Sundance Film Festival in Park City, Utah on Jan. 21, 2011, left, and singer, actress and activist Lena Horne in New York on April 7, 1994. On Friday, it was revealed that Solange Knowles would become the first recipient of the prize, to be awarded in a ceremony at New York’s Town Hall on Feb. 28. (AP Photo)

Horne, who died at 92 in 2010, was a pioneering entertainer. She was considered the first Black actress to make waves when signed to MGM and starred in Black-audience films like “Stormy Weather.” Though she was considered one of the most glamorous stars in her heyday in the 1940s and 50s, her opportunities were curtailed due to racism. However, she still flourished through the decades and won a Tony among other accolades.
Belafonte and Horne were close friends who also performed and recorded together. They also banded together due to the racism they endured.

Belafonte recalled the difficulty they faced despite their immense fame in New York City, where some of the most exclusive buildings would not allow either one of them to live in the 1950s. Belafonte ended up shielding his identity and buying one of those buildings and gave Horne the penthouse.

What’s the point in being popular if you can’t popularize things that are worth knowing about? – HARRY BELAFONTE

“I was very glad that I found the resources to do it,” he said. “I began to load it up with people who were quite prominent. … like Sidney Poitier, like Lena Horne, like Danny Glover, who came much later.”

Belafonte, well known for his civil rights activism throughout the years, says Horne became more politically involved the closer she got to like-minded entertainers like himself and Paul Robeson, and would become a big booster of civil rights organizations, particularly during the movement.

“She was a huge contributor because she found the best way to use her strength and notoriety, (which) was to make sure she did things that stimulated attention and positive response,” he said.

READ MORE: Tamir Rice’s mother and ACLU team up for booklet to teach kids how to interact with police

Belafonte wishes more entertainers of today would follow in her footsteps and decries those who are afraid to use their celebrity for activism.

“That desire not to offend is all about money and it’s all about popularity as an end in itself. What’s the point in being popular if you can’t popularize things that are worth knowing about?” he said. “There are a lot of great Black people all over the places … My deep regret is that political power has been somewhat blurred by people turning that power into a misuse of popularity.”