Say What?!! Lionel Richie is convinced Stevie Wonder can see 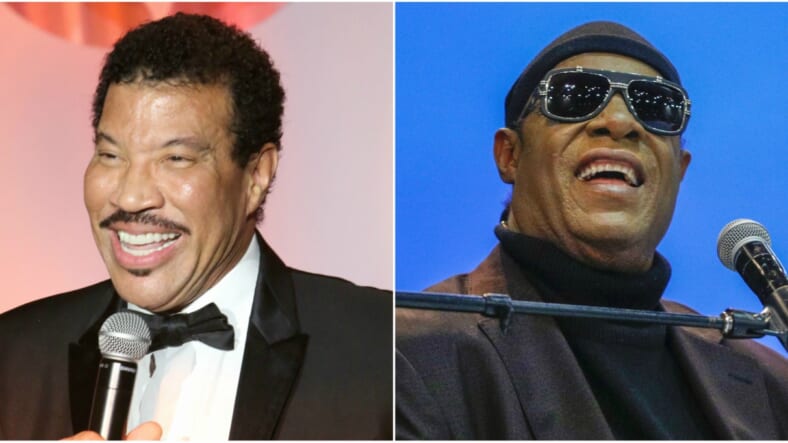 It is no secret, and a widely accepted fact, that Stevie Wonder has been blind since infancy, but now a fellow music icon Lionel Richie, doesn’t believe it. In fact, he jokingly said he’s convinced Wonder has been pulling the wool over our eyes all these years and can see just fine.

According to US Weekly, Wednesday, the the American Idol judge made the admission while appearing on The Kelly Clarkson Show.

READ MORE: Deon Cole on ‘beef’ with Stevie Wonder, ‘He took my girl from me’

“I’m going to tell you something. I’ve been spending my whole life with him thinking he can see. I know he can see,” Richie, the former Commodores frontman confessed. “Listen [to] the story I tell that’s the funniest. I went to his house. He says, ‘Wanna hear a new song? I’ve got it in the car. C’mon, go with me.’”

“We go out to the car. ‘You sit on the passenger side, I’ll sit on the driver’s side,’” he said Wonder instructed him. “He cranks the car up, he puts the tape in, right? And then he does this [turns around] and starts driving back down the driveway.”

The singer said the sudden move made him freak out and scream, “Stevie! What are you doing?” to which a bemused Wonder responded, “Ah, got you, didn’t I?”

According to several biographies Wonder, born Steveland Hardaway Judkins (later changed to Morris) in 1950, was born prematurely with retinopathy of prematurity, a condition that comes from abnormal blood vessels in the retina and affects premature babies. By the time he was six weeks old, his sight was completely gone.

But the man who recorded multiple all-time classic albums including “Talking Book,” “Innervisions,” “Songs in the Key of Life,” “Hotter Than July,” and “In Square Circle” has never let blindness hold him back.

Wonder and Richie, who were both part of the golden age of Motown Records’ during the 60s and 70s met at a Commodores concert at New York’s famed Apollo Theater and have been friends for decades. They also famously joined forces for the recording of the 1985 charity single “We Are the World” alongside Michael Jackson, Tina Turner, Billy Joel, Diana Ross and Ray Charles, among others.

“He’s a great songwriter, a great musician and most of all a great human being,” Wonder told Access Hollywood about Richie back in 2016 at MusiCares’ Person of the Year ceremony. “The truth of the matter is that we are honoring a man who was part of the duo who wrote a song that changed the world [‘We Are the World’]. We all came together in the spirit of love and doing something to make a difference. It literally woke the world up, through the idea and concept of giving back to our fellow man.”