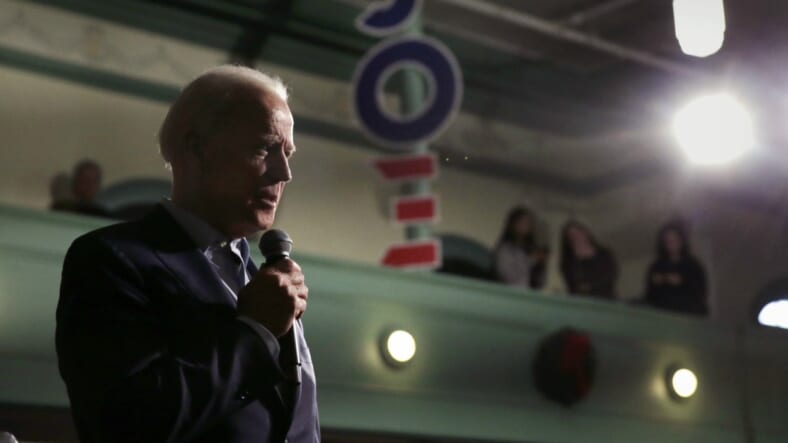 Democratic presidential front-runner Joe Biden may be taking the idea of reaching across the aisle farther than his 2020 election competitors.

According to CNN, while at a campaign stop in Exeter, N.H., Monday, the former vice president answered a question about whether he would consider picking a Republican as his vice-presidential running mate, with, “The answer is I would, but I can’t think of one now.”

Biden made the remark in the state which will hold the first Democratic primary in less than two months. Until this revelation, all the speculation about his running mate had centered around non-white males, such as former Georgia gubernatorial candidate Stacey Abrams and former candidate Sen. Kamala Harris.

While Biden has consistently struck a conciliatory, cooperative tone about working with Republicans, that party has shown little desire to return the favor to him. The root of the improprieties that got President Trump impeached recently was his and his administration’s attempts to engage Ukraine in digging up incriminating information to use specifically against Biden.

There has not been a major-party presidential ticket in modern times in which the nominee and his or her running mate has been from the opposing party. According to CNN, the late GOP senator John McCain considered Democratic senator Joseph Lieberman in 2008, but settled on Republican Sarah Palin to eventually be beaten by Barack Obama and Biden.

For what it’s worth, Biden clarified his statement in Exeter by saying, “You know there’s some really decent Republicans that are out there still, but here’s the problem right now … they’ve got to step up.

“There’s a plethora of really qualified people,’’ Biden said. “Whomever I would pick were I fortunate enough to be your nominee, I’d pick somebody who was simpatico with me, who knew what I, what my priorities were and knew what I wanted to.’’