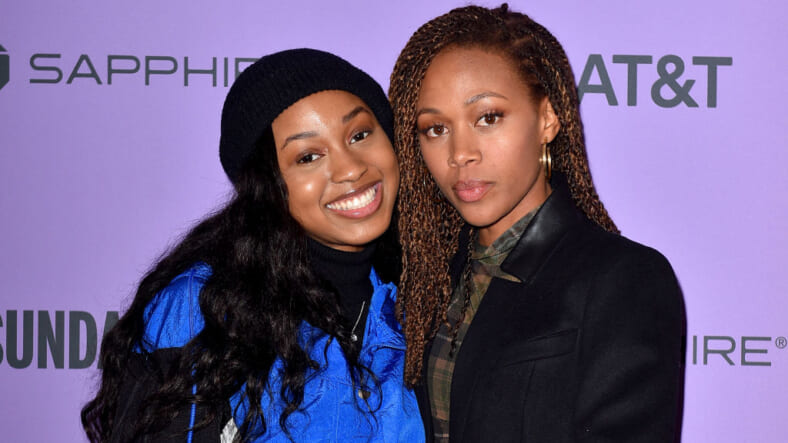 When Sundance announced the flicks that would be showing at this year’s film festival, Miss Juneteenth was a title that instantly peaked our interests. Now that we’ve seen the beautiful film starring Nicole Beharie and Kendrick Sampson we can’t say enough good things about it.

In her directorial debut, Channing Godfrey Peoples created an understated masterpiece that highlights the sacrifices a mother will make to keep her child from repeating her mistakes as well as the lengths children will go to please their parents.

Turquoise Jones is a single mom who holds down a household, a rebellious teenager, and pretty much everything that goes down at Wayman’s BBQ & Lounge. Turquoise is also a bona fide beauty queen—she was once crowned Miss Juneteenth, a title commemorating the day slaves in Texas were freed – two years after the Emancipation Proclamation. Life didn’t turn out as beautifully as the title promised, but Turquoise, determined to right her wrongs, is cultivating her daughter, Kai, to become Miss Juneteenth, even if Kai wants something else.

Nicole Beharie is simply mesmerizing as Turquoise Jones, a former beauty queen who should have had the world at her feet when she won the coveted title of Miss Juneteenth and earned herself a full scholarship to any HBCU of her choosing.

We quickly learn that despite the win, she didn’t make it to college, but instead became a young mother to a now 15-year-old girl, Kai. She’s separated from her husband, Ronnie (Kendrick Sampson) who seems like a well-intentioned screw up who constantly puts himself before his family. What’s most interesting is the dynamic between this estranged couple, still clearly in love with each other but unable to make it work in a real way. Turquoise seems to maintain a hope that her husband will change his ways and be the man she needs him to be, but in the meantime, she’s providing for her daughter on her own and making sure she doesn’t repeat her mistakes.

That means she has to win the Miss Juneteenth pageant at all costs and we see Turquoise making tough sacrifices to ensure that happens. Kai couldn’t care less about the competition or its prize but that doesn’t stop her from appeasing her mother’s requests.

This beautiful film offers Nicole Beharie a chance to show off her range and it is wide. She has the uncanny ability to convey her sentiments without even speaking. The expressions on her delicate face morph into nearly every Black mother’s I’ve ever met in an instant.

The slow-moving film is an ideal vehicle to show off these talents and the end result is truly beautiful. Sadly, we’ll have to wait and see if any studios will buy into this understated but gorgeous tale of a woman coming to terms with her past and embracing her future despite the circumstances. There’s no huge plot twist, no dramatic event, no huge surprises, Instead, it’s a slice of life film that so many mothers and daughters will relate to if they ever get to see it.