Black voters helped propel Biden to a crucial win in South Carolina’s Feb. 29 primary, where he landed almost 50 percent of the vote 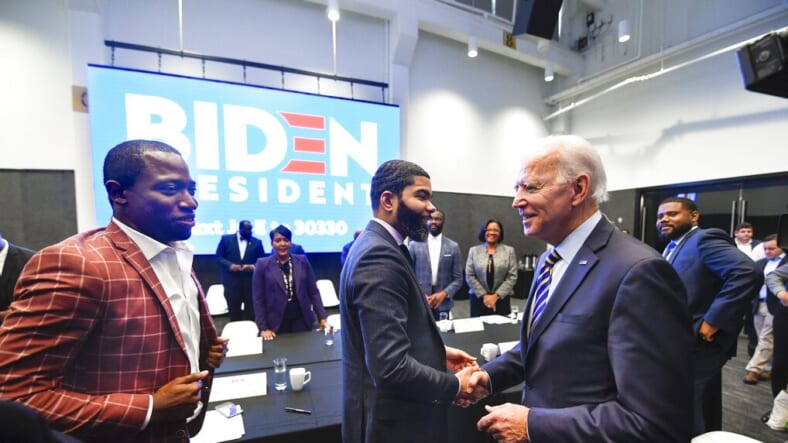 During his victory speech in South Carolina on Saturday, Joe Biden thanked Rep. Jim Clyburn for lifting, “me and this campaign on his shoulders.”

If he wins big today on Super Tuesday, Biden can most assuredly credit it to the power of the Black vote.

The former vice president is expected to remain competitive with Sen. Bernie Sanders (D-VT) because of Black voters who are giving him the chance to score delegates in majority Black districts, according to Politico.

The bonus is that Democrat rules give additional delegates to proven Democratic district strongholds and this includes the mostly Black districts where Biden is expected to perform well.

“We’re giving him rocket fuel,” said Alabama Rep. Terri Sewell, who endorsed Biden and hails from the state’s 7th Congressional District which is 63 percent Black and known for its role in the Civil Rights movement.

Biden visited the district over the weekend to commemorate the 55th anniversary of Bloody Sunday.

Sewell’s district sits on a coveted perch in the Democratic nominating process. Because of its great track record for party candidates, the district has eight delegates – three more delegates than the second closest district, Politico reported.

If Biden wins Alabama’s 7th Congressional District, it could help him win the entire state.

“It’s not so much a multiplier effect that Biden can enjoy as it is a boost, an extra something, a little ‘lagniappe’ as they call it in French,” Matt Seyfang, a delegate math expert who worked on Pete Buttigieg’s campaign before he withdrew on Sunday, told Politico.

Both Buttigieg and Amy Klobuchar, also a former Democratic candidate before she dropped out, have endorsed Biden.

“It was a resounding a*s-kicking,” Seyfang told said. “Black voters came through in a big way. My hunch is that South Carolina gave permission for black voters everywhere, and some white voters, to vote for Biden.”

These districts are expected to not only given Biden a win, but they are also indicative of how his campaign might fare in other primaries, including Louisiana, Mississippi, Georgia, and Florida.

There are 1,357 delegates represented in the Super Tuesday states. To win the Democratic nomination, a candidate must reach 1,991 delegates.

Sanders so far leads Biden in delegates by 60 to 54.