The Secretary reminds voters of the objective, ’The most important issue is who can defeat Donald Trump.’ 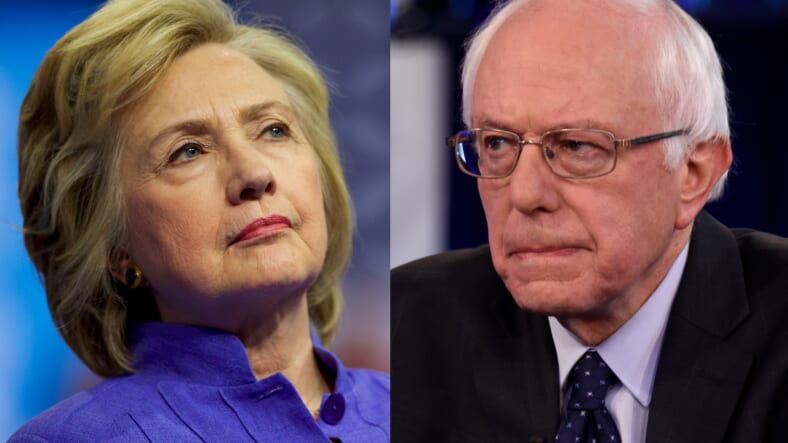 “I don’t think he’d be our strongest nominee, no,” Clinton told Good Morning America in an interview on Super Tuesday. “And that’s what this primary process is about. Let’s see who emerges, but for everybody voting today or in any of the contests ahead of time, the most important issue is who can defeat Donald Trump.”

The Sanders campaign offered no response to Clinton’s remark.

It’s no secret that Clinton is not a fan of “The Bern.” The former secretary of state and the Vermont senator were bitter opponents during the 2016 democratic presidential primary. Even though Clinton emerged victorious from that scrapple, the damage was already done.

On March 6, Hillary’s four-part docuseries, Hillary, will be released on HULU. But in January, her fierce criticism of Sanders from the series emerged.

“He was in Congress for years. He had one senator support him. Nobody likes him, nobody wants to work with him, he got nothing done. He was a career politician. It’s all just baloney and I feel so bad that people got sucked into it,” The Hollywood Reporter reported.

At the time, Sanders also declined to comment on the docuseries criticism, saying he was focused on beating Trump.

Since the criticism of Sanders surfaced from the docuseries, Clinton has said she will back the Democratic nominee whoever that is. And in Tuesday’s GMA interview, she didn’t go so far as to say Sanders couldn’t beat Trump.

She just made it clear that she doesn’t think he’s the party’s best option.

Clinton told GMA she’ll be “watching and hoping that we nominate whoever is the strongest candidate to take out the current incumbent.”

When the network asked Clinton her opinion on Sanders’ position that he should win the Democratic nomination if he receives a plurality of pledged delegates but doesn’t reach the golden number, Clinton laughed and told the morning show: “Let’s follow the rules. We’ve got rules.”

When asked if she still feels Sanders’ campaign in 2016 was “just baloney,” as she said in her docuseries, Clinton responded that she said what she said.