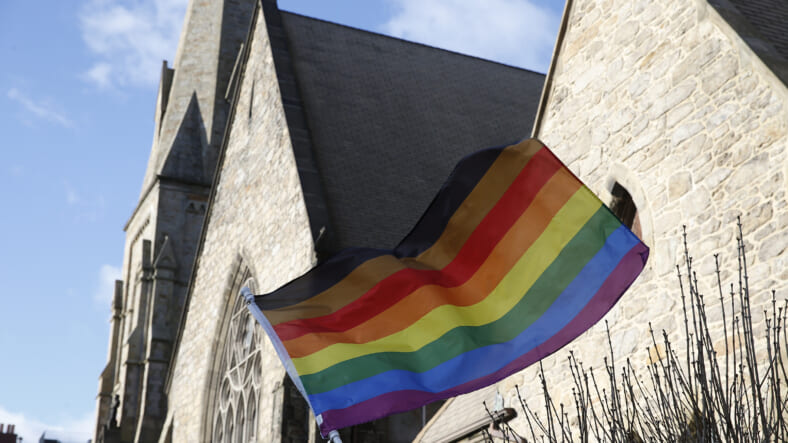 For too long, Black lesbian, gay, bisexual, transgender and queer (LGBTQ) people of faith have been forced into the shadows in some communities, fighting to stay true to their faith without sacrificing their identities.

While certainly not a problem unique to people of color or to any specific faith tradition, there is a persistent myth — one that has risen again throughout the 2020 election cycle — that places of worship in the Black community are less welcoming.

As Black people of faith, we have seen and experienced that sometimes, LGBTQ people are searching for a God that they have been told does not love them back. But we, and our community, know that in reality, God is love, God is acceptance and God is inclusion. If we are going to spread that message of radical love, and continue to win hearts and minds to advance LGBTQ equality, we must bring the struggles of Black LGBTQ people of faith out of the shadows and into the light.

In fact, the Black church served as the headquarters for the civil rights movement, producing defining leaders like the Rev. Dr. Martin Luther King, Jr. For generations, the Black church has been the conscience of America. The Black church serves as a powerful force in our political process, helping to educate and register voters, as we have seen in this election cycle and throughout our history.

And LGBTQ people have always been a part of the Black church just as they have always been a part of the fabric of our nation. Unfortunately, Black LGBTQ people of faith and other LGBTQ believers have all too often been made to feel invisible. That invisibility is in part because of a dangerous myth across many religious institutions that a person cannot be LGBTQ and also a person of faith.

The simple truth is that being both LGBTQ and a person of faith is not contradictory by default. Whether or not faith and lay leaders are aware of it (or choose to acknowledge it), there are LGBTQ people in their houses of worship today — and LGBTQ people have always been there. There are countless, faithful LGBTQ people participating in religious life in houses of worship across the country, and their experiences should be recognized — not discounted.

Ensuring equity and justice for all people, while giving all individuals the space and freedom to be fully themselves, is a message inherent in all major religions and faith traditions. In fact, the cornerstones of religion and faith and the LGBTQ movement are the same: inclusion and justice. That’s why Black Protestants are just as, if not more likely, to recognize discrimination against the LGBTQ community and to favor non-discrimination protections.

Recognition of this truth — and changing the narrative around LGBTQ people of faith– is critical. That is why the Human Rights Campaign (HRC) is launching a concerted, national effort to form relationships with a diverse range of prominent houses of worship across the country — not only with historic Black churches, but also evangelical churches, synagogues, mosques and other religious and spiritual communities.

Together, we launched this effort last Sunday at the nation’s Historic African Episcopal Church of St. Thomas, Philadelphia, a community of faith that serves as a role model for the ways in which people of faith can begin finding common ground with LGBTQ people in their communities. St. Thomas Church has a long history of engaging in outreach to the community around them and ensuring the welcoming love we see in the Gospels is felt by everyone — including LGBTQ people.

LGBTQ people are in every faith tradition, and LGBTQ people and people of faith have more similarities than they do differences. Both are based on the importance of ensuring equity and dignity for every individual. Finding a way for faith traditions and LGBTQ voices to speak that message together and ensure it is heard in the 2020 elections will grow the power of both movements.

If we speak with one voice, we can be a powerful political voice for justice. And in finding common ground between us, we will dispel the myths, change the narrative and ultimately advance fairness and equality for all.

Alphonso David is the President of the Human Rights Campaign.  Alphonso is an accomplished and nationally recognized LGBTQ civil rights lawyer and advocate. He’s the first civil rights lawyer, the first Black man and first person of color to serve as president of HRC in the organization’s 40-year history. He has been at the forefront of the movement for LGBTQ equality for more than a decade at the national and state level, serving and as Counsel to New York Governor Andrew Cuomo, as New York Deputy Secretary and Counsel for Civil Rights, and as a staff attorney at the Lambda Legal.

Father Martini Shaw is the 17th Rector of St. Thomas. Native of Detroit, Michigan, he holds two undergraduate degrees, one in psychology and one in biological sciences. He earned a Masters of Divinity Degree from McCormick Theological Seminary (Chicago, Illinois). He also holds a Certificate of Anglican Studies from Seabury-Westernm Theological Seminary (Evanston, Illinois). He holds a Doctorate of Ministry in Liturgy from the Graduate Theological Foundation at the University of Oxford. He was ordained to the Episcopal Church in 1988. In 2003, he became the 17th Rector of the Historic African Episcopal Church of St. Thomas (Philadelphia). He is a member of the NAACP.