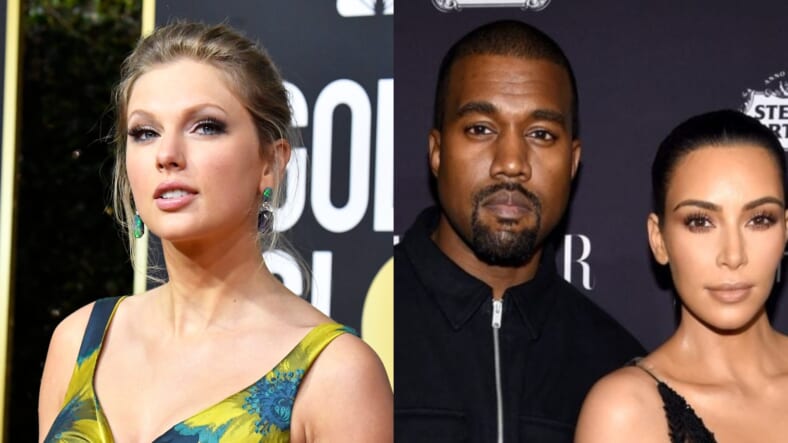 Years ago, Kim Kardashian West effectively bested her husband’s nemesis, Taylor Swift, when she released video footage on her show proving that the singer had lied about a conversation with husband Kanye.

The clip ruined Swift’s reputation and sent her into hiding for a year. However, new audio suggests that the reality star may have been playing dirty. A 25 minute audio of the infamous call leaked Friday.

West is heard telling the “Shake It Off” singer to brace herself. He mentions the line about them possibly having sex.

“So it says, ‘To all my Southside n— that know me best/ I feel like Taylor Swift might owe me sex,” Kanye laughed.

The two entertainers then discussed him declaring that he made her famous. Swift was famously interrupted by Kanye at the 2008 MTV Music Awards which brought her greater public recognition. She has maintained never approving the line “I made that b*tch famous”

“Did you say that? Well, what am I going to do about it? It’s just kind of, like, whatever at this point. But I mean, you gotta tell the story the way it happened to you and the way that you’ve experienced it. Like, you honestly didn’t know who I was before that,” she says.

“Like, it doesn’t matter if I sold 7 million of that album before you did that, which is what happened. You didn’t know who I was before that. It’s fine. But um, yeah, I can’t wait to hear it.”

Kanye released his song “Famous,” in 2016 and Swift was publicly upset about being called a b*tch in the lyrics. But when Kardashian released showing she’d allegedly approved the song lyrics, the public began calling the pop star a snake, pushing her into a hiatus.

Although Swift made a comeback in 2018 with the release of her revenge driven project Reputation, that chapter has remained a sore spot for the singer who maintains she was set up.

As Jezebel reports, “for many, the video Kardashian originally released was vindication for their dislike of Swift. They felt it laid bare her calculating nature, as she apparently signed off on lyrics and then feigned shock, outrage, and surprise for public sympathy when the song was released. ”

READ MORE: Taylor Swift on feud with Kanye West: ‘He literally did the same thing to Drake’

Over the weekend, Kim and Swift were liking posts that suited their narratives. Swift has since gone on the record about the latest chapter in the ongoing feud.

On Monday, Swift broke her silence about the leaked call according to PEOPLE. She claimed vindication but wanted fans to focus their attention on the ongoing coronavirus global pandemic that has claimed lives.

“Instead of answering those who are asking how I feel about the video footage that leaked, proving that I was telling the truth the whole time about *that call* (you know, the one that was illegally recorded, that somebody edited and manipulated in order to frame me and put me, my family and fans through hell for 4 years)…SWIPE UP to see what really matters,” Swift wrote on Instagram Stories.

She directed people to The World Health Organization and Feeding America organizations. She has donated to both.

“If you have the ability to, please join me in donating during this crisis,” Swift continued.