Amazon workers walk out on the job in protest of coronavirus

Employees fear working because the mega-shipping company has not sanitized the facility, even after workers were diagnosed with COVID-19 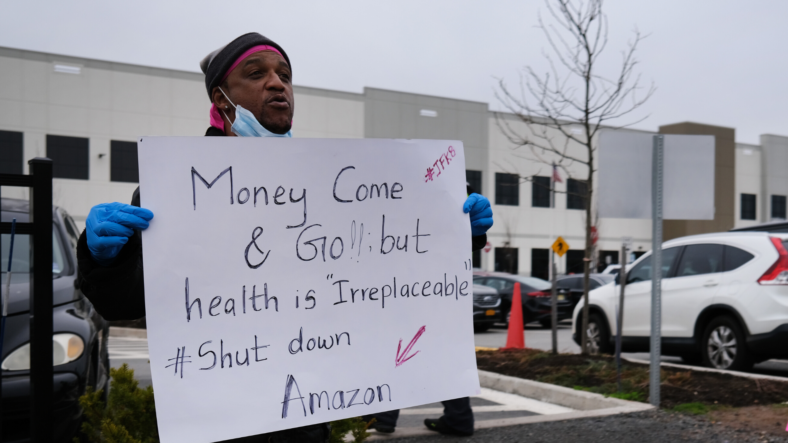 NEW YORK, NEW YORK - MARCH 30: Amazon employees hold a protest and walkout over conditions at the company's Staten Island distribution facility on March 30, 2020 in New York City. Workers at the facility, which has had numerous employees test positive for the coronavirus, want to call attention to what they say is a lack of protections for employees who continue to come to work amid the coronavirus outbreak. (Photo by Spencer Platt/Getty Images)

Amazon warehouse workers in New York City have walked off the job in protest, accusing the company of failing to clean their workplace even after several employees tested positive for COVID-19.

Chris Smalls, who organized the protest, and a group of employees formed a picket line outside the Amazon fulfillment center in Staten Island, staying at least six feet apart from one another to practice social distancing.

“People are afraid to work. People are there working and they’re putting their lives at risk because there are a number of (coronavirus) cases that they are not aware of,” Smalls, who works out of the warehouse, told ABC News.

“We’re trying to get the building closed down and sanitized. That’s all we’re asking for,” Smalls added.

In addition to the uncleaned worksite, Smalls said Amazon is being dishonest with its employees about the actual number of employees who have the virus. Smalls told ABC News that management only confirmed one worker at the warehouse tested positive.

“That’s a bold face lie because I sent home the third case directly,” Smalls said, claiming to know about seven positive cases at the warehouse where more than 4,000 people work.

Smalls himself has been on quarantine since Saturday after he came in close contact with one of the workers who has coronavirus. He said he sent the infected employee home after she showed symptoms of the disease. His suspicions were confirmed after the worker tested positive the next day. Still, Small said his higher-ups allowed the worker to return to work until her test results came back.

He said the company is choosing profit over health.

Amazon released a statement to ABC News stressing that it is attempting to keep workers safe at the Staten Island fulfillment center. Further, Amazon said Smalls’ comments that the company is jeopardizing workers’ safety are not true.

“Of the 5,000 employees at our Staten Island site, 15 people— less than a half a percent of associates— participated in today’s demonstration,” Amazon’s statement reads. “Our employees are heroes fighting for their communities and helping people get critical items they need in this crisis.”

“Like all businesses grappling with the ongoing coronavirus pandemic, we are working hard to keep employees safe while serving communities and the most vulnerable,” the company added in its statement. “We have taken extreme measures to keep people safe, tripling down on deep cleaning, procuring safety supplies that are available, and changing processes to ensure those in our buildings are keeping safe distances. The truth is the vast majority of employees continue to show up and do the heroic work of delivering for customers every day.”

COVID-19 has killed roughly 800 people in New York City, according to ABC News.