The delivery guy sets the package down on the porch, leans over and spits. He then catches some of the spit and appears to wipe it on the package as more saliva falls out of his mouth. 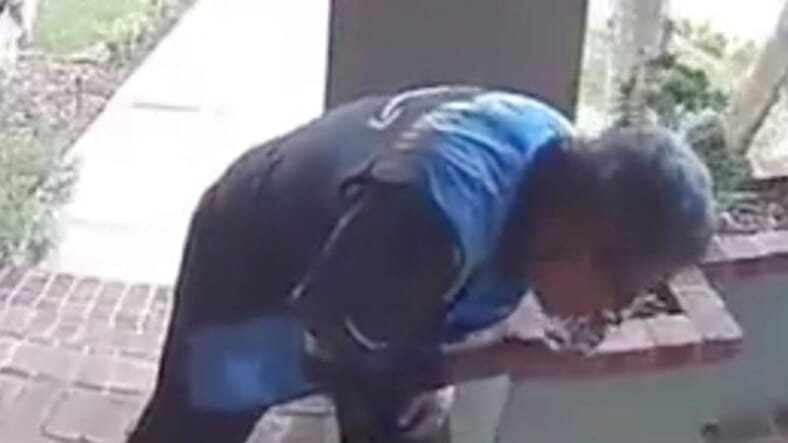 A delivery man spits on a package (Credit: screenshot)

While the rest of the country is on self-quarantine and avoiding physical contact, one callous Amazon delivery driver in California was caught on video spitting on a package and smearing his saliva all over the top of it.

According to TMZ, the disturbing footage was taken Thursday evening at a duplex residence in L.A.’s Hancock Park neighborhood.

The outlet reports, “the delivery guy sets the package down on the porch, leans over and spits … then catches some of the spit and appears to wipe it on the package as more saliva falls out of his mouth. He then stands up as if nothing gross just happened, and takes a photo to verify the delivery.”

A neighbor of the person whose package was spit on contacted Amazon to report the incident and had a customer service rep watch the clip.  After the rep gasped in dismay, they then confirmed the man in the video was an employee from a third party service. Although he was reported, they warned there was a possibility that he might be back on the job today.

“This is clearly not representative of drivers who deliver for Amazon and the care they take for customers around the world every day,” an Amazon spokesperson responded to TMZ when reached for comment.

“We are aggressively investigating to understand what may have occurred in this situation. If it truly was a malicious act by the driver, we will be sure he is held accountable, up through and including law enforcement action.”

Given the current health crisis and the fact that America now has the highest confirmed cases of coronavirus in the world, federal law enforcement is considering classifying acts of people intentionally spreading COVID-19 as a form of terrorism.