While the LAPD said no arrests were made, law enforcement had to call for back up as the defiant crowd became agitated. 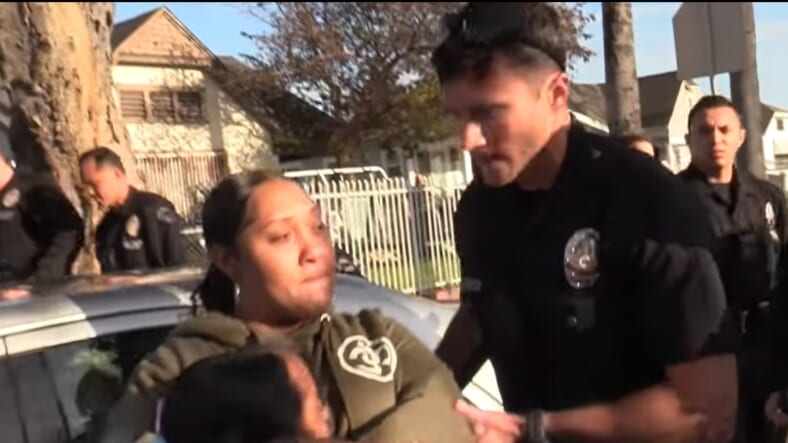 Mayhem ensued in the Hyde Park area of Los Angeles this past weekend after approximately 40 people showed up to celebrate a child’s first birthday, in spite of nationwide directives to, “stay at home” and LAPD officers had to break it up.

Footage taken at the scene on Saturday, shows the shocking moment when a huge line of police officers had to forcibly disperse angry partygoers. They had chosen to disregard social distancing rules due to the coronavirus.

While the LAPD said no arrests were made, law enforcement had to call for back up as the defiant crowd became agitated.

The video begins with what appears to be a group of women and children angrily shouting at officers, who created a barricade by forming a line. The officers are later shown herding the group away from the scene.

Previously, Los Angeles, Mayor Eric Garcetti has called for a shutdown on the city of nearly 4 million people. He even had to threaten uncooperative business owners with power shutoffs and arrest to make them comply.

Nationwide defiance comes with a consequence

Monday, Virginia Governor Ralph Northam announced that that the state’s stay-at-home order had been extended to June 10.  Some Virginia residents have apparently not been taking the nationwide quarantine guidelines seriously enough.

“We are at the beginning of a period of sacrifice,” Northam said during a press conference in which the announcement was made. “This is an unprecedented and difficult time; it will be hard for people, and I understand that. But I have faith in you as Virginians. We need everyone to take this seriously and act responsibly.”

“I want to be clear: Do not go out unless you need to go out. This is very different than wanting to go out,” he warned.

He also pointed out that “some of our beaches and other recreational areas were literally packed” over the weekend, and warned that, “everyone who is gathering in a crowd is putting themselves and others at risk.”

In Virginia, violators can be punished by up to a year in jail and a $2,500 fine.